A VERITABLE TREASURY OF FOLKTALE MAGIC

Author S. Rob declares that the reader will be in possession of ‘a magic denied to most’ – the lost world of, and power of, folk magic!

‘Lost’ it may be to the modern world, but it still lingers in different places, traditions hidden and transmitted by word of mouth from one generation to another.

THIS BOOK IS FULL OF SUCH OLD TALES AND TRADITIONS, WHICH ARE A REPOSITORY OF POWERFUL OCCULT LORE!

There are yet people – including ‘young folk’ – who believe implicitly in the existence of fairies, goblins, elves, leprechauns, pixies, and such like ‘figments of the imagination’. Some leave offerings to such beings in the hope of soliciting their help. Others routinely leave a little drink on their windowsill, while yet others claim to see the little people!

In ages past country folk – and not a few town folk too – believed that we are surrounded by all kinds of strange and inexplicable little beings, usually hidden. ‘Proof ’ of their existence was claimed by odd happenings such as a household object missing for days, only to eventually turn up in the very place where one first looked several times for it!

As anyone who believes in such things will testify, such creatures are invariably mischievous as well as helpful!

The tradition was that one left offerings, so as to solicit their help, not their mischief!

Who can explain why, for example, an appliance will not work at all – it has given up the ‘ghost’ (pun intended!) – only to suddenly and inexplicably start working at the very moment one is about to dump it?

This book takes you into the lost world of folk magic, a world of deep superstition and magic.

The point of this book is to let the reader in on the powerful forces concealed within the stories – forces which have the power to shape lives and influence events.

HERE IS PRICELESS INFORMATION HARD TO FIND ANYWHERE ELSE!

This book collects folk tales from not only Worcestershire, Devonshire, Yorkshire, and Suffolk – obscure, forgotten tales – but also better known tales from elsewhere, such as the Pied Piper of Hamelin, and tales told by Native Americans. Belief in magical beings of every shape and size is worldwide – and such belief may be ignored or forgotten, but not so amongst the few who are not afraid to be guided by their imagination.

But how much is mere ‘imagination’?

The boundary between imagination and fact is often blurred, and even today there are still sightings of actual ‘deer-women’, ‘dog-headed men’, ‘little people’, and so on.

According to the author, these beings inhabit a parallel universe, traversing different realities. They can be contacted, even invoked.

THE FORCES THEY CONCEAL ARE POTENT INDEED. This is not mere fairy tales for childish amusement! Each tale conceals magical truths. You can access this magic, AND IT IS VERY SIMPLE.

The author interprets the tales, explaining their hidden magic and how the reader can use it.

THIS BOOK IS YOUR PASSPORT TO THE MAGICAL ENHANCEMENT OF YOUR LIFE.

Within its pages is real power, power which you can now command – safely and confidently.

Whatever you seek or desire in life can be magically brought closer to you. For all existence, according to the old beliefs, is inhabited and governed by realities hidden from normal view!

These realities can be made known to you, so that you can work with them, so that they work on your behalf.

This has to be better than remaining ignorant of them and not having them on your side – which is the case for 99% of people!

Discover the truth of the ‘Glamour Spell’. This is to APPEAR YOUNGER OR SOMEHOW DIFFERENT TO WHAT YOU REALLY ARE. This is real – true – magic. Simple too – but lost to the modern mind which stupidly thinks that what is seen, heard and touched is the only reality.

Discover how one can make oneself magically less noticeable to others. This is almost like being ‘invisible’! One is not noticed, not seen!

THIS BOOK GOES BEYOND THE MERE TELLING OF STORIES ABOUT FAIRIES – IT SHOWS HOW TO ACTUALLY FIND THEM AND MEET THEM.

Learn how to create or make a ‘magical belt’ – again very simple – which brings the wearer an assured sense of health, strength and power.

Similarly the reader can make a ‘magic ring’, again simple – which the tradition says enables the wearer to project and receive power.

The mystery of the ‘Flying Carpet’, a secret metaphor for a potent means of astral projection. You are shown how to do it, again, like everything else in this book, surprisingly simple.

The ‘Mojo Bag’ and the ‘Magic Arrow’ are explained. The power in dance and chant. Incantations for raising power. working a hex … and much more in this remarkable book! 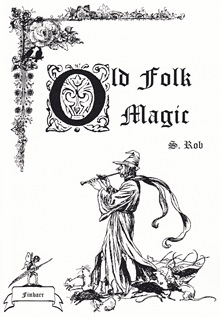