Warning: This Is A Book Of Satanic Magick: Please Do Not Read This Advert If Likely To Be Offended

THE ONLY BOOK ANYWHERE TO REVEAL THE IDENTITIES AND INVOCATIONS OF THE MIGHTY SPIRIT RULERS OF THE WESTERN WORLD!

The christian Bible tells of Satan leading Jesus to a high place and offering him everything he saw: the inference being that Satan owned the material world and everything in it. And so for centuries, the pious have renounced the material world of possessions and riches. 'What is of this world is sinful' - and millions still believe it.
Satan has at his disposal vast legions of spirits, both mighty and inferior, which, according to the Satanists, rule the towns, cities, and countries of this world.
THIS IS THE ONLY BOOK TO NAME THESE AGENTS OF SATAN AND TO EXPLAIN HOW THE BLACK MAGICIAN CAN MANIPULATE THEM TO DO HIS BIDDING. Whilst the white magician seeks and prays for the help of 'good' spirits, the black magician in point of fact compels dark unseen forces to do his bidding, for no god can compete with a man or woman who knows his true magical worth.
Satanism is a direct descendant of Satism from Set, the Egyptian Dark One, whom many, including Pharoahs, believed was the Superior One. Egyptian initiates dealt with the reality that the spiritual universe consists of both light and darkness.
ACCORDING TO THE SATANIST, TO BE SUCCESSFUL, WHETHER IN ACCUMULATING RICHES OR THE ARTS OF SEDUCTION, ONE NEEDS TO KNOW AND CONTROL THE DARK SPIRIT OF THE APPROPRIATE PLACE!
THE RITUALS IN THIS BLACK GRIMOIRE ARE SURPRISINGLY STRAIGHT-FORWARD, GIVEN THE SUBJECT MATTER... YET AMAZINGLY POTENT!
This is the only book to name Satanic Lords of London!... New York!... Chicago!... Paris!... Mexico!... Moscow!... Baltimore... Munich!... liverpool!... Dublin!... Amsterdam!... Sydney!... Vancouver!... Birmingham!... Manchester!...AND SCORES MORE CITIES... AND DOZENS OF COUNTRIES!
Each of the Dark Lords' characters, attributes, functions and offices are carefully outlined and explained.
HERE IS GENUINE SATANIC MAGICK FOR GAINING THE BLACK MAGICIANS OBJECTIVES. This book is chock full of specific detail for success in so many areas, figuratively and literally. A few examples: Anything to do with farming... locations of buried treasure and gold... power over creditors... power over those in authority... separating other people... inflicting or cursing disease... power over bankers and loan agencies... real estate; buying and selling of property... anything to do with cars, trucks; vehicles in general... contracts, legal agreements... works of mischief and destruction... carnal designs on women... control of relatives.
Anything electrical... all buying and selling... power over wills and testaments... influencing politicians and people in high places... sexual adventures in general... anything to do with furniture... anything concerning surgery... employees/employers... anything concerning music... all artistic pursuits... love matters... enchantment of beauty... increased mental powers... more vitality... will power... gardens; everything concerning growth; vegetables, fruits, animals... riches, opulence; prosperity in whatever form.
Anything to do with holidays... anything to do with construction; building... making another person spellbindingly generous towards you... finding valuable antiques for next to nothing... freedom from embarrassing situations... financial windfalls... commanding respect and admiration... healing an unhappy marriage, or ending one... reducing another person's fever... receiving sudden wealth... becoming invisable; astral travelling... dealing with rivals... correcting physical imperfections... healing broken limbs... expelling unwanted visitors... stock market investments to get money flowing to another... abolishing another person's dependency on narcotics... ending sickness... AND MUCH, MUCH MORE!
HERE IS SATANIC RITUAL SIMPLIFIED... WITHOUT THE NEED FOR COMPLICATED CEREMONIAL, EQUIPMENT AND THE REST OF IT. In this compelling book you will read of :
* THE ANCIENT PATH OF ETERNAL NIGHT
* INVOCATION OF THE BORNLESS ONE
* THE BLASTING ROD
* THE DISCHARGE
* THE BLACK MAGICIANS ULTIMATE PROTECTION
* CONTROLLING EVIL SPIRITS
* A SPELL FOR AN ASSIGNATION
* SUBORDINATE SPIRITS
* COUNTERING OTHER MAGICIANS
* LUCIFER, BEELZEBUB, ASTAROTH
* SUMMONING THE SPIRITS OF THE DEAD
* THE LICENCE TO DEPART
Carl Nagel, author of many occult books, regards this as the 'culmination of his life's work'. Deeply versed in mysticism and 'the way of the light', he has nonetheless found that ultimately 'it's the Devil whom delivers'. So maybe the Bible is right after all - Satan rules this world, owning what's in it, and delivering to those who seek of it. Mr Nagel remarks, 'Satanism has brought me everything I've ever needed or wanted... wealth... women... health. Hail Satan!'
WE REPEAT: THIS IS THE ONLY BOOK ANYWHERE TO REVEAL THIS HIGLY SOUGHT AFTER INFORMATION: THE NAMES AND OFFICES OF THOSE BEINGS WHO CONTROL THE THINGS YOU SEEK, AREA BY AREA. IF YOUR LOCATION IS NOT LISTED, DON'T WORRY, FOR THE AUTHOR EXPLAINS WHAT TO DO. You can get what you want wherever you are now. 'THE BLACK GRIMOIRE OF SATANIC RULERSHIPS & PRINCIPALITIES': you are safe to use it - but dare you? 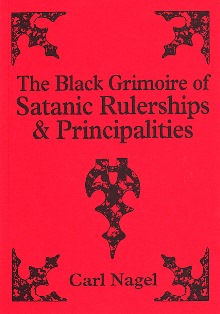