SECRETS OF THE ANCIENTS
Description

SECRETS OF THE ANCIENTS

CALL DOWN THE WHITE FORCES FOR GOOD! Anael to win love... Solarus for radiant health... Raphael for success... Lunarus for fertility and increase... El for gambling wins.
CALL DOWN THE DARK FORCES FOR GRATIFICATION! Asmodeous for seducing and man or woman!... Bechard for more money than you need!... Satan for revenge!

NOW YOU CAN USE BLACK MAGIC TO DEAL WITH RIVALS AND ENEMIES
and... White Magick For Blessings, Good Health, Love, And Luck!

The awesome powers of magick can now be at your command.
At last you can use Magick to not only heal (white) - but also harm (black).
And you can possess this amazing power within hours of reading this unusual book.
For the first time an occult write shows how both aspects of the Secret Art can be at your disposal.
You can use this book only for White Magick if you so wish; but you may also want to use it for Black Magick.
Author Carl Nagel gives you a choice!
This unusual book shows how you can now command the beneficent powers of white Magick to enrich your life in every way; to bring you radiant health and vitality... all the money you need... love and friendship... a lifetime of endless blessings!
But what do you do when you have a rival who is competing unfairly with you? What do you do when you have an enemy who is deliberately making your life a misery?
You can now - if you so wish - raise Dark Powers to teach such person a lesson they'll never forget.
Yes! you can use real Black Magick safely and secretly!
This book allows you to choose the kind of Magick you want!
If you disagree with Black Magick you need only ignore the sections in this book which deal with it: You will find chants and invocations to protect you from evil, and to fill your life with blessings of every kind!
The White magick rituals in this book are so potent that they can get you every good thing you want out of life!
You need never turn to Black Magick, if you so wish. But it is there if you need it.
This is the only book that gives you such a choice.
And if you think Magick - be it White or Black - must be complicated to be effective then we have good news for you. The chants, rituals, and invocations in this book are more easy than you would normally find.
Simple, yet powerful. And safe.
And there are no incenses, oils, or complicated paraphernalia to buy.
Here you will find the actual rites and invocations for making real changes in your life happen, as used by the magicians of old! Within these pages you will discover:
Invocations to the Higher Spiritual Beings - described in chapter 3 - which can make you: Loved, popular, and in demand... Charged with boundless energy... Receive money whenever you need it... Success in business... Achievement of your goals... Become more creative and produce works of art... Peace and harmony at home and work... Peace between friends... Success in farming and growing things... Protection when travelling... Win competitions... and much more!
The author describes the invocation of the Lower Dark Forces for: Controlling the opposite sex... Receiving unlimited riches... Hidden power over those in authority... Hexing opposition; and many of the other things frowned upon by most white magicians!
This may shock some readers, but it is believed that some persons who have risen to sudden and seemingly unmerited power and fame have done so through the powers of Black Magic!
Carl Nagel adds (p.27) 'From my own personal experiences I know it, can (often) produce results within 24 hours of it being implemented in one's affairs'.
But whether you use the light or dark powers, or both, one thing is for sure, Magick will work for you.
So you can try whatever variety of Magick which pleases you entirely at our risk.

Wife Gets Rid of Husband - The sparkle in Carol's marriage had disappeared years ago. She now had a lover, but trying to get a divorce would be an uphill task. How could she get rid of her husband - short of murdering him? She performed the curse on page 19. To her astonishment she came home one day to find ha had packed his things and left! Later he agreed to a divorce!

Made Husband and Wife Split Up - Linda was devastated when her boyfriend of six years suddenly left her for another; and worse, he soon married her! After years of devotion to him she felt utterly betrayed. She wanted revenge. She called up Satan and the results were dramatic! The couple in question are now divorced; he even came to Linda begging her to take him back!

Psychic Attack Repelled - Ben was an easy going guy who minded his own business, but would never fail to give some-one a helping hand if they were in trouble. But he had the worst possible luck: everything he did went wrong. He was getting into debt, his son was in trouble with the law, and his sleep was disturbed night after night by terrible nightmares; to name just some of Ben's problems. A clairvoyant friend suggested to Ben he might be the target of psychic attack. He performed this book's ritual to find out who this enemy might be. he was flabbergasted and deeply hurt when he found out who it was - the last person on earth he suspected! He decided to 'fight fire with fire' and summoned the forces of darkness to his aid. Ben's enemy met with catastrophe: his wife left him, he lost his home, and had a nervous breakdown. Ben's luck on the other hand at last began to improve.

Keeps Lover True - Sue loved her man passionately, but the problem was he couldn't be faithful! Over and over they quarrelled about this. She didn't want to lose him altogether so she turned to Black Magick. He has never seen another woman since!

Wins $50,000! - Freda, in her 50s, was up to her ears in debt. She was so hard-up that she could not even afford second-hand-clothes. She turned to the beneficent forces of White Magick. The Solaras' invocation brought her a $50,000 win on the Irish sweepstakes!

Song Published! - Pete couldn't get his song accepted until he invoked the angelic spirit Raphael! he has since secured a lucrative song publishing contract with a major company from which he made $6,300 in the first three months!

Win Man's Love! - Mary was so lonely, and the man she loved cared little for her. The Anael Chant changed everything. 'Now he's crazy for me!', she wrote.

Health Restored! - Kate's health was so poor that life seemed almost unbearable. The list of ailments from which she suffered could almost fill a medical directory! 'I felt better immediately after using the Solaras' Chant, she reported!

Can I use Magick to help another person?
Certainly. You will find an excellent example of this time in the White Magick Wish Fulfilment Ritual on page 57 which shows how to get money magically flowing to that person.

I desperately need $10,000 within the next 6 months. Can Magick help me to get it?
Easily! Invoke Solarus and he will make sure that you have this amount well before this time!

To practise Black Magick must I sell my soul to the Devil?
This is nonsense! The Devil is but personification of the dark force below your own conscious mind. The rituals in my book show how this dark power may be used to your advantage. There are no blood sacrifices nor magick circles on the floor to make. 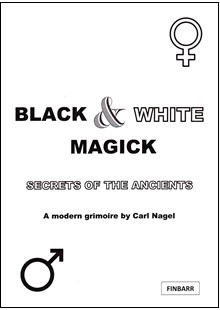