The Myth & Cult of The Forbidden
Description

THE ONLY BOOK EVER PUBLISHED, GIVING THE COMPLETE MYTH & CULT OF DIONYSUS A BOOK THAT EXPLAINS HIS RELEVANCE AND MEANING TO US TODAY!

DIONYSUS, MYTH & CULT OF THE FORBIDDEN

by James F. Cullinan, who writes: 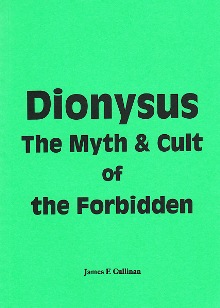