Gestures from the ancient world
Description

THE POWER OF GESTURE

One of the hazards of being an occult book publisher is the flak one gets from religious fanatics. Just recently a wildeyed man banged on my front door and I went out to meet him from the side door. There he was, long shaggy beard and wearing what seemed to be some kind of kilt or skirt, and carrying – would you believe – a club. ‘I have been sent to save you in Jesus’ name!’ he proclaimed. I replied I didn’t need ‘saving’ and walked away. Then from my upstairs window I watched him as he stood in the middle of the road making some strange gestures at the house.

I knew that this was a bad omen. And I was right, for about a week later I received some very bad news.

Meantime I had made my own gestures to neutralise or reverse the bad luck that was coming. To my amazement, three weeks later the wild-eyed man called again – but this time smiling and conciliatory – he wanted to be my friend. I was baffled, but even so I shook his hand vigorously for I recognised this as a most favourable omen.

It was, for very soon after, in the midst of my crisis, I had one of my biggest strokes of luck in years.

I tell you this, because I was so pleased to receive this manuscript, ‘The Power of Gesture’, from occultist S. Rob, for this is a subject that urgently needs to be explained to everyone who seeks to better their life the mystic way.

This booklet, ‘The Power of Gesture’, tells you everything you need to know. And unlike my unwanted visitor, Mr Rob, like so many occultists, is a tolerant man, who writes for even the Roman Catholic as well as the pagan. For the Power of Gesture knows no religion or creed.

Gesturing is a primal psychological and magical expression of the subconscious mind.

IT CAN GET YOU ANYTHING YOU WANT, BE IT LOVE, PEACE AND HARMONY … WHATEVER, claims Mr Rob.

There is so little to it, yet it is so potent. Movement of the hands and arms in a purposeful way releases psychic energies which speed up the attainment of your desires.

This is both powerful psychology and powerful ‘magic’.

‘Magic’ is the art of making things happen in accordance with one’s will and imagination, usually facilitated through the medium of ritual. Gesture on its own can make ‘magic’ happen.

This is not a work of ‘white’ or ‘black’ magic, for it calls upon natural forces as old as humanity itself. It is primal psychology. How one uses it is down to the individual, for it can be employed for both good and ill.

YOU NEED THIS INFORMATION FOR DEFENSIVE PURPOSES, IF NOTHING ELSE.

Psychologically and emotionally we are all bombarded, and unless adequately safeguarded we all risk a fall. The ‘offensive’ position is equally important, for one has to go out and get as well as keep and conserve what one already has.

The purpose of Mr Rob’s booklet is to provide the reader with a powerful aid for making his or her life so much better. Indeed one’s life can be improved through the Power of Gesture alone – without rituals, candle burning, etc.

Decide what you want. Is it more confidence? The attention or love of another person? To be stronger? To be free of illness and a much healthier person? To win back someone’s love and affection? To have more influence over people? Know what you want and the Power of Gesture will help you get it, says Mr Rob.

This is not fantasy. This is a highly charged reality. Highly successful people, particularly strong leaders, are adepts at the Power of Gesture. Indeed, almost everyone uses gesture in some way.

The problem is that they don’t realise that they are, that – if correctly applied – it can work handsomely for them, instead of having no purpose. And the way it works seems like ‘magic’.

You can perform gestures in your own privacy. Or, as the occasion allows, in public, but without attracting undue attention.

The long-term effects may astound you! And you may be annoyed with yourself that you hadn’t exploited this natural innate power before – but then you didn’t know it could be this.

There are two attitudes to life, the optimistic and the pessimistic. The former believes he or she can succeed, the latter doesn’t think so. Gesture can make the difference. Gesture, used purposefully, can make you the successful type.

This is a terrific booklet. Its content should be known by all as the perfect antidote to failure and hopelessness. It is easy to read and follow, and offends no one’s religious sensibilities. It goes to the core of human psychology – yet seems to work like ‘magic’. Treat yourself to this: you deserve better in life. 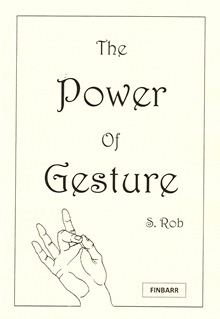