PYRAMID INCANTATIONS OF THE ANCIENT EGYPTIANS

PYRAMID INCANTATIONS OF THE ANCIENT EGYPTIANS

The Ancients' Way to Money, Luck, Health, Love and Power!

ABSOLUTELY NO EQUIPMENT REQUIRED; NO PYRAMID TO BUY, NO CANDLES, HERBS OR INCENSES INVOLVED, EVERYTHING YOU NEED IS IN THIS THICK, QUALITY BOOK.

DIFFERENT TO ANYTHING ELSE YOU MAY HAVE READ ABOUT PYRAMID POWER BEFORE. THE ONLY BOOK ABOUT THE ANCIENT EGYPTIAN GODS TO MAKE THE SUBJECT COMPLETELY READABLE AND ACCESSIBLE TO MODERN MAN.

This amazing new book is the most exciting occult publishing event of recent years! It reveals for the very first time and ENTIRELY SIMPLIFIED system for invoking the fabulous gods of Old Egypt, so that your life may be enriched beyond your fondest imaginings!

5,000 years ago the magicians of ancient Egypt had access to the awesome secrets of Nature. The great pyramids that were built were occult symbols of the awesome power of the Cosmos and the limitless power of the human mind!

This limitless power can now be released through the fabulous Pyramid incantations in Mr Nagel's book. NO OCCULT EXPERIENCE OF ANY KIND IS REQUIRED TO GET RESULTS FROM THESE MYSTERIOUS INCANTATIONS. They will work for anyone who will make the small effort to try them.

But this is more than a book of incantations. It teaches how to heal yourself of any health problem, control your own destiny, and the secrets of life and death. THIS BOOK TEACHES YOU IN A SIMPLE AND DIRECT MANNER HOW TO UNLOCK THE SPLENDOUR OF YOUR SUBCONSCIOUS MIND TO MAGNETIZE ALL THE GOOD THINGS YOU DESIRE IN LIFE. And it is absolutely safe. beginners can feel secure working with this esoteric knowledge.

* How the Great God Ra Works His Magick Through All Living Things.

* How to Ensure the Success of Your Pyramid Incantations.

* The Magick Command That Will Bring Pyramid Energy Flowing Into Your Life.

* The Amazing Power Within the Pyramid Hieroglyphics.

* HOW ROBERT D. USED PYRAMID POWER TO ATTRACT AN EXPENSIVE STEREO SYSTEM FROM OUT OF NOWHERE.

* HOW VIRGINIA P. USED PYRAMID INCANTATIONS TO BECOME A SUCCESS IN LIFE.

* HOW PAUL T. FOUND A LOST GOLD MINE.

* HOW ELIZABETH G. FOUND THE LOVE WITH THE HATHOR LOVE RITUAL.

* Using Magick Pyramid Power to Find Missing People and Lost Objects. HOW TO PYRAMID YOUR WAY TO RICHES

* Spells and Rituals to Bring you Money.

* How John D. Materialized a Yatch.

* The Secret of Pyramid Money Power.

* How to Become an Overnight Success.

* The Secret of How to Receive Money When Needed.

* How Grant W. Attracted a Six Figure Profit in One Year.

True stories of how a man cured himself completely in three weeks of mysterious abdominal pains - the pains never returned!... A housewife addicted to nicotine for 30 yaers which not even hypnosis could treat, breaks the habit at last after using the Pyramid Secret of The Ancients... A man cures his 4-year old daughter completely of asthmatic attacks... A 70-year old woman suffering from cardio-vascular disease tries Pyramidic Healing Techniques with amazing results. This book gives specific instructions for also healing your friends and loved ones!

USING PYRAMID MAGICK TO PROBE THE SECRET THOUGHTS OF OTHERS. THE INCREDIBLE SECRET OF PYRAMID TELEPATHY - How it Saved One Woman's Life - How Frank J. Improved His Love Life Through Pyramid Telepathy - PART A: USED TO READ MINDS AT CLOSE RANGE - PART B: USED TO READ MINDS AT A DISTANCE - How Andrew A. Turned The Table on An Unscrupulous Fellow Employee - PART C: HOW TO CREATE A TELEPATHIC BARRIER - How to Know If Someone is Attacking Your Mind - Using Your Pyramid Mind Barrier - PART D: USED TO MENTALLY COMMUNICATE WITH ANIMALS - HOW TO PROJECT YOUR MIND THROUGH TIME AND SPACE - PART E: USED TO CONTACT SPACE ALIENS.

My name is Jim Barry and I am a writer by profession, having published on such disparet subjects as the biographies of rock singers amd a muscle building course. I am also an occultist with a special interest in Ancient Egypt. I want to tell you about what I believe to be one of the most exciting new books to have been published in recent years. This book is: "PYRAMID INCANTATIONS OF THE ANCIENT EGYPTIANS" by Carl Nagel. prior to publication I was asked by the publisher to test its content to see if its amazing claims really worked. Here is my report:

First I tested the Osiris Incantation for Money which took five minutes a day over a nine day period, in accordance with the book's instructions. On the ninth day I received straight out of the blue a £500 offer to write a series of articles on famous blues' musicians!

Next I tried the Hathor Incantation for Love. This, too, was required to be performed for five minutes a day, over a nine day period. I had been going steady with the same girl for two years and I couldn't get her to seriously talk about marriage. I was hoping this Pyramidic Incantation would make her receptive; other instructions I had followed from various occult books hadn't worked so I thought that this would be an excellent test for the Incantation's efficacy.

To my amazement on the ninth day of performing the Incantation my girl phoned to say that we should marry - and as soon as possible!

By now I was convinced that these Pyramid Incantations of the Ancients Egyptians were no ordinary occult instructions - THEY CONTAINED WITH THEM A STRANGE POWER THAT COULD GET RESULTS!

The publisher wanted me to test other Pyramid Incantations from this amazing book, I happily obliged!

I tried the Incantation to Anubis for finding lost objects, described in Part Two of the book. I had lost a beautiful pair of gold cufflinks which I hadn't worn for some time. I looked everywhere, but for the life of me I just couldn't find them. It was as if they had vanished into thin air! I was flabbergasted when on the seventh day of performing the Incantation I found the cufflinks in the drawer of my writing desk, where they were definately not before. It was almost as if the Egyptian god Anubis HAD PUT THEM THERE HIMSELF!

Now totally convinced of the efficacy of these incantations, I decided to try Mr Nagle's Pyramid Astral Doorway instructions.

IN SPITE OF BEING A STUDENT OF THE OCCULT I HAD NEVER BEFORE BEEN ABLE TO ACHIEVE A SUCCESFUL ASTRAL PROJECTION. I had tried every method there was, but never could I get as much as a slight feeling of separation from my physical body. It seemed as if astral projection was simply not for me.

To my astonishment on the third day of performing the Astral Doorway Incantation I experienced a complete and total separation of my astral and physical bodies! It was the most exciting and most joyful experience of my life. SINCE THEN I HAVE ENJOYED SEVERAL VERY EXCITING AND REWARDING ASTRAL PROJECTIONS: PASSING THROUGH WALLS, ROOFS, COMPLETE BUILDINGS - GOING WHERE I LIKED, SEEING WHAT I LIKED! This is the "Invisible Man" story come true for me!

My final testing of this book's instructions was with the Pyramid Incantation to the god Horus, healer of diseases. For some time I had a large boil on the side of my face which wasn't responding to medication. I used this boil as the focal point for my Horus' Incantation. After nine days nothing had changed. It looked as if this particular exercise was not going to work. But O was hasty in my assumption, for the very next morning I saw that the boil HAD HALVED ITS SIZE ALL IN ONE NIGHT!

Two weeks later there was no trace whatsoever of that ugly boil.

I am totally convinced of the efficacy of this book's instructions. I often failed with other occult books, but with this one i've been winning all the way. This book is different. It will dumbfound any sceptic who's willing to give it a try. Whatever else you do. DO NOT FAIL TO GET THIS BOOK. Give this book - and yourself - a chance. You owe this to yourself and loved ones. 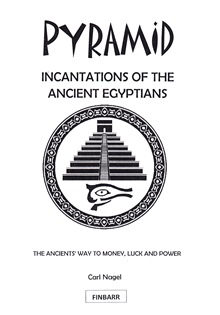