New book is the work of a pragmatic researcher.  He began his research as a sceptic and wound up totally convinced of the reality of the Afterlife and Reincarnation.

For once you can have absolute proof that consciousness survives bodily death.
Books on the Afterlife are usually so 'spiritual', so philosophical that they leave the questioning reader in mid air.
This new book is written by a pragmatist for practical people.
Reincarnation, says researcher Peter Nichols, is not a mere theory of abstract idea but AN ABOSOLUTE FACT OF EXISTENCE.
Peter Nichols invites the reader to be sceptical as she begins to read his book.  IT IS HIGH TIME THE WAFFLING AND MYSTIC, PIE-IN-SKY, SPECULATION IS DISCARDED SO THAT THE REALITY CAN BE SEEN - AND EXPERIENCED.
This book on reincarnation is like no other.
This book DEMONSTRATES POSITIVELY AND EXACTLY HOW IN FACT REINCARNATION IS A LIVING REALITY, not dependant on mere belief or faith.
You will be shown how it is vitally important that you understand reincarnation now so that you may re-shape your destiny.
Once you have the real facts about reincarnation YOU CAN SOLVE PRESENT PROBLEMS RIGHT NOW.  Because the realization that you have lived before - and that you will live again - can change your entire perspective of the present.
This book doesn't ask you to believe in reincarnation from the outset - on the contrary you are asked to be sceptical and questioning so that you may recognize - and accept - the proof when it appears.
Utter nonsense surrounds this subject that one is an ant in one life and a solider in the next, or that you may be a housewife today but you were once Cleopatra, or that on your last incarnation you were Venusian, and in the next incarnation you will be a great film star - but never mind the fact that today, in this life, you are a nobody struggling to make ends meet! Small wonder many are sceptical!
Reincarnation is not theory BUT A LIVING FACT - AS CERTAIN AS THE BEATING OF YOUR HEART - WHICH YOU CAN BELIEVE IMPLICITYLY WHEN YOU HAVE THE EVIDENCE.
This book is full of evidence not of statistics but of the only kind that matters that WHICH YOU CAN PROVE FOR YOURSELF.
This book dares go where no other will.  You are shown how you can prove - to yourself - without the slightest doubt that you have lived other lives and that you will live again.
YOU WILL BE SHOWN EXACTLY WHO YOU WERE IN PREVIOUS INCARNATIONS.
You will also be shown how to stop the endless round of incarnations!
We are dealing here with facts not illusions, nor wishy-washy 'New Age' thinking.
MAKE NO BONES ABOUT IT - THIS COULD BE EASILY THE MOST IMPORTANT BOOK YOU WILL EVER READ.  IT COULD CHANGE YOUR LIFE DRAMATICALLY.
It can bring you freedom from present tension and conflict.  It can bring you health, prosperity, and an unshakeable belief in the meaning of life.
In a world of extreme injustice and cruelty it is almost impossible to truly believe in a God and his universal goodness, says the author.  LITTLE IN THIS LIFE MAKES SENSE, he says.  UNTIL WE UNDERSTAND WHAT REINCARNATION IS REALLY ABOUT.
Not everybody reincarnates.  But everyone survives physical death.
Total proof can be found in this book.
There is no heaven where one sits for eternity playing a harp.  The afterlife is a completely different experience.
If you already believe in reincarnation this book may give you a few totally unexpected surprises.  You will see how so much that has been written about reincarnation doesn't add up.  You need the proven facts, for your karma could depend on it.
And what is 'Karma'? This much misunderstood subject is for once made clear in this lucidly written book.
If someone says 'You will incur a heavy karma for hurting me', is he right or talking nonsense?
KARMA DOESN'T WORK LIKE THIS.
Get the facts in this book.
RIGHT NOW YOU ARE PROBABLY IN LOVE OR IN CONFLICT WITH SOMEONE - FIND OUT WHY IN THIS BOOK. You have been in a similar situation with this same person in a previous life.

And what about the experience of death itself? Are you apprehensive? Do you really think death spells the end of you?
You can prove to yourself straight away that spirit survival is a fact, once you have the information in this book.
THE AUTHOR EXPLAINS THIS EXPERIENCE OF DEATH AND THE EVENTS WHICH FOLLOW IT.
Take a difficult subject like abortion.  THE FACTS OF REINCARNATION THROW A COMPLETELY NEW LIGHT ON THIS SUBJECT, facts unknown to both paries in the abortion debate.
THIS BOOK, IN THE LIGHT OF HITHERTO UNKNOWN FACTS CONCERNING REINCARNATION BRINGS BADLY NEEDED CLARIFICATION TO DIFFICULT MORAL ISSUES.
Capital punishment is another controversial subject - but almost no one knows what happens to an exected criminal after death.  This book brings a startling revelation.

AND KARMA - ARE WE ALL TO 'SUFFER' IT? Karma - or destiny - can be manipulated.  You can change the course of events right now.  You can enjoy a happy Afterlife, and the next incarnation can be better.  YOUR FUTURE CAN BE BETTER THAN YOUR PAST!
This book lays reincarnation on the line.  This is not the product of 'a spiritual' journey through India' - a land where beliefs in reincarnation and karma are used to justfy inactivity and indolence - it is the product of one man's search for SCIENTIFIC ANSWERS.  Peter Nichols is a businessman - in fact one of Canada's most in demand seminar speakers - whose attitude is 'if I can't prove it I won't believe it'.
He doesn't ask you to take anything he says at face value.  But he urges you to TEST his findings.  Only by personally proven evidence can you believe.
Before he began his research Peter Nichols possessed no clairvoyant abilities and he was largely sceptical about the idea of reincarnation.  Now all that's changed.  He doesn't have to believe what others have written, he has the personal evidence.  He has precise information about his previous incarnations - names, locations, dates - and precise past life information on his relatives and friends.  You can duplicate his experiences with the aid of this easy-to-follow book.
In his book Mr Nichols explains:
WHAT HAPPENS AT THE MOMENT OF DEATH... WHERE THE SOUL GOES AFTER DEATH... SCIENTIFIC PROOF THAT THE SOULS SURVIVES DEATH... THE FACTS AND FALLACIES OF REINCARNATION... HOW REINCARNATION AND KARMA WORK, AND HOW THEY AFFECT YOUR PRESENT CIRCUMSTANCES... WHAT YOU SHOULD KNOW ABOUT YOUR LOVED ONE AND ENEMIES.  DISCOVER THEIR PAST... WHAT ACTUALLY HAPPENS IN BETWEEN INCARNATIONS... DOCUMENTED CASE HISTORIES OF SURVIVAL AFTER DEATH... POSITIVE DETAILS ABOUT THE AFTERLIFE - WHAT HAPPENS THERE, WHO DOES ONE MEET... WHAT ASTRAL TRAVEL IS ABOUT... THE AFTERLIFE FOR PETS AND ANIMALS...THE TRUTH ABOUT STILL BIRTHS AND CRIB DEATHS... PROOF THAT SPOUSES AND LOVERS ARE REUNITED THROUGH SUCCESSIVE INCARNATIONS.  THE AUTHOR'S OWN STORY... HOW TO FACE DEATH WITH JOY AND HOPEFUL EXPECTANCY.

'REINCARNATION REVEALED' is a book you cannot afford to ignore. 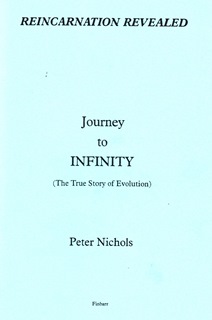