TAKING CONTROL OF A GROUP

SECRET TEXT REVEALS OCCULT MANIPULATION OF GROUPS OF PEOPLE, NO MATTER HOW LITTLE OR LARGE!

Here is rare occult information: I have seen this in print only once before, and that was part of an initiates' course not available to the general public!
IT MAY SEEM CRAZY, BUT WHAT IS HERE IS NOT SCIENCE FICTION.
IT'S NOT SOME WACKY FUTURISTIC IDEA!
It is established occult practice, as old as the most ancient civilizations!
IT SEEMS BIZARRE, BECAUSE NO-ONE - OR VERY FEW - CAN BELIEVE THAT AN INDIVIDUAL CAN MANIPULATE ANY LARGE GROUP OF PEOPLE BY OCCULT MEANS!
But this secret information has been used for centuries by those with access to it.
It is based on practical, PROVEN occult principles!
I learnt it from an advanced occultist who would not bother with anything that wasn't tried and tested!
Strangely enough, this unusual man - my teacher - was almost what one would call an 'atheist': a lot of things he definately didn't believe in, because he could find no evidence for their existence!
BUT SECRET CONTROL AND MANIPULATION OF ORGANIZATIONS BY OCCULT MEANS HE KNEW TO BE AN ABSOLUTE FACT!
The only limitations in life are the limitations we set ourselves!
We limit ourselves with our beliefs. THIS TEXT DEMONSTRATES EXACTLY HOW AND WHY THIS INFORMATION WORKS. Once you read it, you will find it makes perfect sense!
Stage magicians and so-called met 'mentalists' amaze and astound their audiences with incredible feats; but they are applying a trick psychology. In the course of their psychological work they stumble on occult principles to which they will not admit!
THESE PRACTICAL, DEMONSTABLE PRINCIPLES ARE LAID BARE IN THIS UNUSUAL TEXT!
Let me explain. What I am saying is that you can INFLUENCE AND BEND THE WILL OF ANY GROUP OF PEOPLE TO DO YOUR BIDDING!
Invisibly! Without them having any idea!
I will not say it is easy; but neither is it difficult.
No rituals are required! No summoning of spirits!
WHAT IS ON OFFER HERE IS HIGHLY CHARGED SECRET OCCULT PSYCHOLOGY!
You are not powerless in this world!
Any individual with the will can affect, influence, manipulate something much bigger than himself!
IT IS NOT IMPOSSIBLE!
On the contrary you will be thrilled by the results once you see them, as you surely will!
You can make a vital and crucial difference in the scheme of things by your application of these occult principles!
So why can't terrorists and other unstable people use such potent information? Firstly, because it contradicts their religious or ideological beliefs, and secondly, because it does not meet their agenda of destruction.
THIS POWER CANNOT BE MIS-USED, BUT IT CAN BE APPLIED FOR YOU TO MAKE A SUFFICIENT DIFFERENCE IN THE SCHEME OF THINGS!
This is an occult fact, but many refuse to believe it: ANY ORGANISM CAN BE MANIPULATED, BE IT ANIMAL, HUMAN OR AN ENTIRE ORGANIZATION!
You can prove this occult fact for yourself!
Naturally, you will not meet anyone - even in occult circles - who would boast they have changed the actions of a large organization.
No one is going to compromise their secret of their power!
ONLY THIS TEXT IMPARTS THIS AMAZING INFORMATION!
NO-ONE IN POSSESSION OF THIS INFORMATION CAN EVER AGAIN FEEL POWERLESS!
To apply this power is THRILLING!
Think of an organization you wish to influence.
YOU CAN DO IT: YOU CAN INFLUENCE ITS ACTIONS!
Some points covered in this text include: Finding the Group Soul - Meeting Resistance From It - How To Overcome Its Resistance - The Importance Of Timing - Binding Opposition - Controlling Astral Forces - Once You Gain Occult Control, It/They MUST Do Your Bidding - Giving It Instructions, and so on!
Case histories from my file include:
* A man, frustrated by a court's decision, followed my instructions.
LATER THE COURT REVERSED ITS DECISION.
* A Pensioner could not get a Health Authority to admit negligence and compensate. She used this power. The Authority reversed its position even suggesting a handsome compensation package!
* A young man was a volunteer in a movement run by incompetents. He believed passionately in the cause, but not in how it was managed. He followed my instructions to the letter : THE ORGANIZATION CHANGED ITS POLICY AND STRATEGY EXACTLY AS THE YOUNG MAN DESIRED!
* A Businessman was unfairly hounded by a government department on point of dispute. I explained to him the occult way to get the department to change its position. IT STOPPED ITS HARASSMENT, EVEN SENDING HIM A LETTER OF APOLOGY!
I can cite more, but the reader will have gotten the general gist.
I always smile when I hear it said that the individual has no power... he cannot change anything.
If that is what is believed then that is what is so!
WHEN YOU READ THIS TEXT THEN YOU WILL KNOW BETTER.
You may be astounded; and you will almost certainly want to use this power.
No harm can befall you. It is based on metaphysical laws as certain as the physical laws which govern the univers.
YOU WILL NOT FIND THIS VITAL, INVALUABLE INFORMATION IN ANY OTHER CURRENTLY AVAILABLE BOOK, I CAN ASSURE YOU!
Organizations, particularly the disreputable and incompetent, manipulate all the time. IT IS NOT IMMORAL FOR YOU TO MANIPULATE THEM!
It is your life, your happiness, which may be at stake! 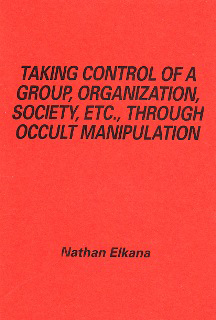