Using seals & the pendulum for success in life
Description

Using Seals and the Pendulum for Success in Life

It is pointless to try and defend the users of talismans, seals and the pendulum against people who ridicule such things. How can the carrying of an article with meaningless insignia possibly influence the outcome of any situation?, goes the usual protestation. It simply makes no sense. It is something, they say, that belongs to the Middle Ages when ignorant minds placed credence in all sorts of superstitious nonsense.

Belief in talismans and pendulums in the micro-technology age is certainly an incongruity, and to all intents and purposes MAKES NO SENSE AT ALL.

It is wiser to agree with the sceptic than to argue. Super-natural matters cannot be proven in debate. Fools, not wise people, waste precious energy trying to convince disbelievers concerning the paranormal.

So whilst the sceptic may snigger at the content of this advertisement, and to him we have conceded that it does not make any sense, we will concern ourselves in this advertisement with the reader perceptive enough to recognise that

THOUSANDS OF YEARS OF BELIEF IN TALISMANIC POWER COULD, IN FACT, MEAN SOMETHING.

It meant a lot to a horse racing punter who decided to practice using the pendulum to determine the outcome of races. As a result he became so consistently successful with his bets that he was able to quit his job and live a very comfortable life from his winnings. A financially desperate housewife, after trying a talismanic ritual, spends her last $5 on a lottery ticket and won a staggering $200,000 within two weeks. A depressed student, convinced that he will never be able to pass his exams, which were only three weeks away, turns to talismanic power and passes every exam subject with flying colours.

These are true stories which author-occultist Marcus Bottomley has collected during his many years of extensive research into this subject. Seals and Talismans, the knowledgeable occult student will confirm, are the product of very careful calculated magickal formulae. Their complex symbology is the product of extremely advanced minds whose understanding of the Laws of the Universe far exceeded that which we call “scientific learning” today. It is NOT meaningless “mumbo jumbo” - the mind able to comprehend their symbolical meaning will readily verify that their inner complexity and power would, if anything, make modern day mathematical dissertions look like “mumbo Jumbo”!!

Unfortunately a great deal of inanity has been dispersed concerning the nature of talismans and the benefits they confer. Carry a “lucky penny” or a “lucky horseshoe” and your dreams will come true. This accounts for a great deal of the disillusionment people feel about talismans. True talismanic philosophy is an exacting mystical doctrine /science, formulated by great minds who had access to sources of knowledge denied to most people…it is NOT the superstitious piffle associated with the popular concept of “lucky charms”. Such charms are not entirely without value because of the psychosomatic effect on their owners, but they should not be confused with the real power contained within GENUINELY CONSECRATED MAGICKAL TALISMANS.

Your lack of luck with “seals”, “talismans” and “charms” could well be due to the fact they were not the real thing.

Discovering genuine talismanic power led one ambitious but unattractive young woman to securing an enviable high salaried position as an executive secretary, regularly travelling the globe. It also led her to marriage to an extremely wealthy businessman. Discovering this power totally reversed the fortunes of one destitute young man – the most incredible piece of instant “luck” put $2300 his way. Another young man, obsessed with a teenage beauty, whom he didn’t stand a chance of attracting, found himself married to her within six months.

The correct use of GENUINE TALISMANIC AIDS is explained in this book. You are shown how to make your own Seals ad Talismans for your own particular problems and needs. All is explained in a clear, precise, step by step manner. The amount of time required to create your own powerful Talismans, Seals or Pendulums is surprisingly small. For the very busy person the small time involved may seem an inconvenience, but this has to be measured against the immense benefits to be acquired once your creations begin working for you. Using Talismanic and pendulum power can give you quick and direct control over every area of your life. This book relates true stories of how it prevented one family’s home from being burgled…a woman miraculously escaped rape against all odds…a construction worker escaped certain death before the disbelieving eyes of his workmates. Each one of these persons was saved by the invisible protective rays emanating from their own self-created talismans. As well as assuring protection of person and property talismanic power can alter financial situations, sometimes overnight. The book relates the story of a penniless divorcee who, in an incredibly short time, acquired a beautiful home, two expensive cars, and a luxury sea cruise around the world. Another case is related of a woman, fearing failure to pass a test to gain a job promotion, carried a Seal during the test, and effortlessly passed.

Most authorities on the pendulum are hesitant about declaring its value in determining betting situations. This book’s author has no such hesitations, asserting that whilst the pendulum cannot be too trusted in such circumstances, its use in a magickal context can certainly make it a very useful and beneficial aid indeed. Cases are related of how, using the pendulum in this way, a man won a $1000 boxing bet…another won a huge £185,000 on the football pools. Of course the pendulum can be used for help in a great deal of other situations. One case is described of how it even helped one man to not only discover that his wife was having an affair, but also ascertain the other man’s identity and, most amazingly of all, the best time to engineer a way of how and when to catch them in the act!

Why seemingly inanimate objects, i.e. talismans drawn on pieces of paper, should exercise such apparent power and influence is baffling even to some “believers”, let alone sceptics. But you are not required to understand. As a child of the Universe you only have to accept. And when a great sum of money or other manifestation of good fortune comes your way, take a leaf out of the sceptic’s book by answering people’s amazement and envy with the phrase “oh it’s just a stroke of luck”. Remember only a fool argues with a sceptic. 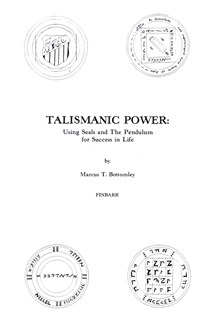