BLACK SPELLS OF THE UNDERWORLD

BLACK SPELLS OF THE UNDERWORLD

‘Perform these spells with faith and positivity’, says the author, ‘and you will be rewarded a hundred times over.’ Elsewhere in this work he states quite emphatically, ‘The rituals here will change your life forever, so make sure that you really want what you desire because you will get it, make no mistake.’ Heady stuff indeed! Unlike most works on black magick, this one features spells and incantations for every area of one’s life, all very positive.

But how does one justify summoning dark powers for a good life? It cannot be ‘justified’ – the only rationale for it is that, for many, it works.

This book is about as ‘safe’ as it gets for practising black magick, for the author shows how to set up a defence invoking the archangels. The author, a practitioner of the black arts for decades, is in no doubt about the safety and efficacy of these spells and incantations.

Who can explain the appeal – and the potency – of such spells? Some see in the ‘underworld’ a metaphor for the unconscious, the deep hidden recesses of the psyche. Deep in the earth are rich deposits of minerals, corresponding to the deep riches hidden in the dark recesses of the human mind. Christians fear this idea, but for the practitioner of the black arts Satan is a liberator.

‘Burning in hell’ is a laughable notion to the Satanist. Like so much else in organized religion it cannot be proven. The only ‘proof’ that the practitioner of the black arts needs is whether the spells work or not. No-one needs a religionist’s advice on this! Let the religionist get on with his religion and leave the Satanist to his pursuit of fulfilment and gratification!

BLACK SPELL FOR A LOTTERY WIN.

BLACK SPELL FOR RIDDANCE OF ILLNESS.

BLACK SPELL TO MAKE UP WITH SOMEONE.

BLACK SPELL FOR PROTECTION FROM DANGER.

And more! There are spells for most needs, and spells ranging from the most simple to the complex. Whichever variety you use, says the author, success is on the cards. 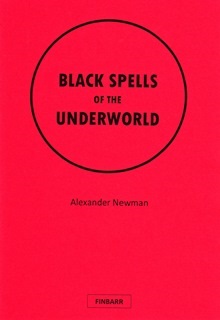