DARK RITES & ENCOUNTERS WITH THE DEVIL

Dark Rites & Encounters With The Devil

Written by Marcus T. Bottomley, Finbarr’s most prolific author during the 1980s.

Mr Bottomley wrote prolifically and most of my best sellers were by him.
Never had I encountered anyone with such an inexhaustible fund of religious and occult knowledge. There seemed to be nothing about magick, whether white, grey or black, that he didn’t know.
He was particularly expert on the rites and prayers of the Church, Jesus and the Saints.
But what no one knew is that he knew even more about the Devil and his works. His view seemed to be: ‘Folk brought up in the Christian way need to feel safe with what they know. Jesus and the Saints do answer prayers.’ What he didn’t say was ‘the Devil – Jesus’ opposite number – was the one who delivered the goods’, which he clearly believed, judging by his comments in this booklet.
And what I did not reveal to the many readers in the ’80s who wrote asking for more Bottomley books, is that I had one which I refused to publish.
Mr Bottomley did not mind. An extraordinary man, who did not even want payment for his work.
Which is not to say that I didn’t pay him, but when I would say, ‘I don’t think I can publish this’, he would respond, ‘Keep it anyway. Don’t worry about the money.’ He didn’t seem to need the cash, and I presumed he didn’t work, for the volume of material he submitted precluded any notion that he had any kind of employment.
But he was anxious that his vast fund of knowledge should not go to waste.
His experience of dark and forbidden rites was first hand. What he saw and experienced would scare the living daylights out of some.
‘DARK RITES & ENCOUNTERS WITH THE DEVIL’ was a work I did not want to publish. Yet he left it with me and it remained under lock and key for 26 years.
But why? After all this time I’m not even sure I can answer this. Maybe because it contained two ‘easy’ rites for killing another. Maybe it was because of the deadly and compelling nature of the other rites.
FOR THESE DARK RITES SEEK NOT TO ‘SWAY’ OR ‘INFLUENCE’, BUT COMPEL.
According to Mr Bottomley, no man or woman can withstand these rites. Once the magician works his or her art the other person is controlled.
This sounds like the stuff of horror fiction, but for anyone who has witnessed the hidden magick of various cultures will tell you, it is not fiction but a deadly reality.
As a publisher I felt uneasy about making this material available. But in the ensuing years I published other taboo magick works which, I suppose, made it easier for me to reconsider.
The alternative would be to destroy it which would have made me feel I had betrayed the author.
Deep down I think I knew I would eventually publish, for there’s something slightly repugnant to me about suppressing magickal knowledge.
For some people black magick is the only way to solve their problems.
THOSE WHO DISAPPROVE SHOULD NOT READ THIS ADVERTISEMENT AND TURN THE PAGE. This information is here only for those who want it.
IT IS NOT FOR THE CASUAL READER OF THE SUPERNATURAL.
Remember, Mr Bottomley has written extensively about supplicating Jesus and the Saints, and so on – and no-one has ever suggested that I should have suppressed those!
According to the author, the black magician can get anything he or she wants through these dark rites.
THESE SECRET DARK RITES ARE NOT AVAILABLE IN ANY SHAPE OR FORM ANYWHERE ELSE.
They are called ‘secret’ because that is what they have been: handed down from generation to generation by word of mouth.
Through these dark rites another person can be turned into a love slave … another made to want only the magician and no-one else – permanently … others compelled to give the magician the money he needs, or an increase in his allowance.
With these dark rites a curse can be reversed. If someone feels they are hexed or that someone is behind their bad luck he or she can rebound it on that person.
With these dark rites a person who has left can be made to return, and they will do so willingly and gladly!
With these rites rivals, he says, can be marginalized or eliminated. The magician can proceed unhindered in his chosen path or career.
With these dark rites evil spirits can be trapped and controlled. The magician is not, he says, at the mercy of dark forces, rather he or she controls them.
Mr Bottomley claims the Devil himself can be called up. According to the author, the Devil is a reality and not the invention of the Church. The Devil, he says, ‘can give the black magician the world and its riches’. He can make the magician wealthy, granting all his or her wishes, and so on, according to the author.
The reader may not want actual encounters with the Devil; most of the rites here require no contact with demonic agencies. The rites are considered ‘dark’ because they draw upon the hidden raw energies of the universal psyche.
There is a rite to make another person stop drinking alcohol. With these dark rites you can also help others.
Necromancy is amongst the dark arts here. How to obtain valuable information thought to be ‘buried with the dead’.
These dark rites can allow one to take control of a haunting. The ghost or spirit can be mastered or expelled.
There is a dark rite to make someone go away.
As for enemies and pests, the black magician has the ultimate occult weapon at his or her disposal. 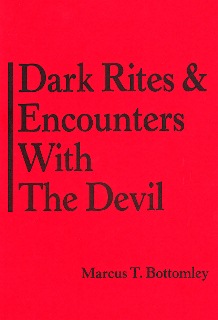