Each time I publish a title on the darker aspects of the occult I receive flak from predictable quarters. Yet as an occult publisher I am responding to the needs of a minority, who demand such material, a minority which itself invariably practises white magic. Are such readers confused – how can they indulge in black as well as white? But why not? I am reminded of a fellow’s comment, ‘When the man upstairs (God) doesn’t deliver I turn to the one below (Satan) to see what he can offer.’ And so it is with Joseph Etuk, the author of ‘Gaining Dark Powers’. He is, would you believe, an enthusiastic member of his local church yet leads a ‘spiritual double life’ as a Satanist! A Satanist with his own group of followers!

His view of Satan and his minions is entirely benevolent. He describes his experiences and encounters with dark powers, and is convinced that Satan is a just and providing master.

The rituals he explains have been tested by his group. Everything he writes is first tested and not based on theory or the recycling of others’ ideas. One of his group had failed abysmally in her black magick rituals so he suggested she try his All- Purpose Prayer. It brought her money and a husband. She is now a ‘born again’ Satanist!

In the Bible the Devil is portrayed as trying to corrupt Jesus with power and wealth. But Jesus was incorruptible.

However, most mortals would relish such ‘corruption’.

As for the notion that one will be ‘damned’ for accepting the Devil’s help, it is just such a notion that keeps the pious in their place.

Allow yourself to be tempted. The ‘man below’ and his helpers can certainly lend you a helping hand. 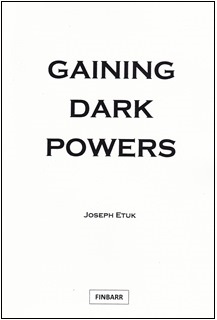