LIFE & BELIEFS OF THE BLACK POPE

The Story Of Anton LaVey As Never Told Before.
Description

'The Devil Looks After His Own'

THE LIFE & BELIEFS OF THE BLACK POPE

Warning: This Book Contains Ideas That Will Shock And Offend Many. Only Purchase If Your Interest In Satanism Is Genuine.

The Story Of Anton LaVey As Never Told Before.

The pivotal figure in Christianity was, of course, Jesus Christ: there never was a comparable figure in Satanism, for down the ages Satanism had been barely acknowledged, when not being condemned.
But Devil Worship did eventually produce its own spokesman: the incomparable Anton LaVey.
He seemed like a character straight out of a scary novel. He slept in a coffin and claimed to be a vampire. He kept pet tarantulas and walked his pet lion at night. His home was described as something out of the Addams Family TV show.
He shocked the world of the occult when he established his Church of Satan in 1966 and proclaimed a blasphemous philosophy which set itself firmly against altuism. It seemed LaVey was against the whole world - not just Christ! Yet he was not a 'rebel': he was much more potent than that!
He tapped into a terrifying - yet ultimately liberating - magickal force within the human psyche!
WE REPEAT: WHAT IS IN THIS BOOK IS CERTAIN TO OFFEND - DO NOT PURCHASE IF IN DOUBT!
The press dubbed him 'the Black Pope', and as the Devil's spokesman he certainly challenged all the tenets of orthodox thinking.
He championed individualism before all else, despising conformity of thought and altruism.
This book was written by J. Finbarr who does not necessary agree with everything LaVey said. 'If you understand laVey's approach to magick, you could gain power barely imagined!', he claims.
The author had always accepted the Right Hand spiritual path. But the Left fascinated him, because he wondered why anyone would want to follow a path that supposedly led to damnation.
The author's experiments with LaVey's ideas led to a sensational discovery!
NEVER BEFORE HAVE THE BENEFITS OF SATANIC MAGICK BEEN MADE SO CLEAR, he maintains.
THIS BOOK TAKES YOU RIGHT TO THE HEART OF AUTHENTIC AND DEADLY SATANIC MAGICK!
Some of it content is so taboo that it cannot be mentioned in this advertisement!
Satanism is about empowerment! It is about the exploitation of 'domination' & 'submissive' polarities! It is about the dark process of the human psyche. The darkly erotic and the unspeakable!
THE AUTHOR FOLLOWED LAVEY'S IDEAS, UNDERTAKING DARING MAGICKAL EXPERIMENTS. 'What I found I could not believe! In one fell swoop I learnt the truth about so much!'
'The truth' is not the sole property of altruistic spiritual thinkers!
The author decided to take 'a path to Hell' to see where it led. 'WHAT I FOUND I WAS NOT PREPARED FOR. AND AFTER FINDING IT THERE WAS NO TURNING BACK.'
'Hell', 'damnation', etc. - What really is behind these concepts? It suited LaVey that people believed in the literal meanings of these words.
In fact he thought he was Christianity's best friend, for it needed someone like him to instill the fear of God onto believers!
THIS BOOK DOES NOT SEEK TO CONVERT ANYONE TO SATANISM. LaVey established his 'churches' one-in-the-eye for orthodoxy. The true power of Satanism is available only to the outsider, for she or he who dares to believe in another reality, hidden from the sight of the masses!
THIS IS ONE OF THE FEW BOOKS EVER TO EXPLAIN THE MECHANICS OF TRUE DARK POWER!
This power is available to the individual who dares!
This is the most daring thing the author has ever written!
'There was a time when I couldn't possibly have written anything like this, but I am now past caring. Moreover, with the power I have since received I need not fear.'
'I do not deny the validity of the Right Hand Path. Every person should be free to pursue what suits them. But I have written this for those who seek a completely different way.'
MAKE NO BONES ABOUT IT: SATANISM IS NOT FOR THE EASILY INTIMIDATED, NOR FOR THE DOUBTING. BUT IT HAS MASSIVE REWARDS FOR SOME, claims the author.
To be a satanist it is not necessary to join any organization!
It is a path for the lone individual, although it is demonstrated how two or more persons together can increase its power.
THIS BOOK REVEALS THE PRACTICAL EXPERIENCES OF A SATANIST. What can be expected and what can be experienced!
Satanism - or at least LaVey's version of it - is not quite what many people think it is. He despised those who used innocents in blood-stained rites. 'The only blood that should flow is that of those who have wronged you!'
Strangely, satanism is awfully close to atheism. But atheism is all of the intellect. Satanism taps into the power of blasphemy, liberating the unconscious forces of the mind.
This book deals in curses and killing through magick.
It describes in detail the processes involved. According to the author such processes can release powers over life and death. An extraordinary claim - but it doesn't matter if most don't believe it!
Christianity and the other organized religions claim a monopoly on moral thought: LaVey spat on them all. He saw in Satanism an alternative morality in which individual responsibility is all that counted.
In Satanism one reads of Black Masses, reversed crucifixes, and other blasphemies: all misunderstood by 'white witches', LaVey claims. These reversals are preludes to turning on their head conventional morality and thought.
Real power exists: sometimes everything has to be turned on its head to access it!
This book has been written and published in the interests of knowledge - and knowledge is power. 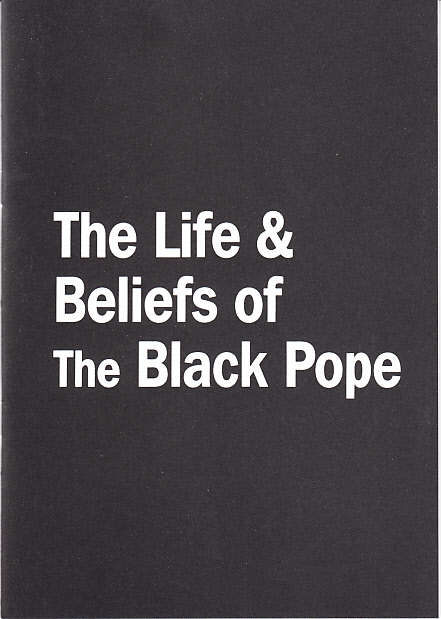