Are you hard of breathing? Do you suffer from bronchitis, emphysema, or some other condition that causes difficult breathing? If so, then you should read this … The Health Breath is the title of a folio written by author Edmund Bruce- Barker. Mr Bruce-Barker suffered a lifetime of poor breathing until his fortuitous meeting with an American businessman on board a Mediterranean cruiser. The American, a sprightly, vigorous 76 year old who looked many years younger, observed the author’s breathlessness when walking the ship’s deck: it was then that he revealed to the author that only a few years earlier he had also suffered terribly from breathlessness; he had been a victim of emphysema and was forced to have a lung removed. His misery was ended when he discovered a simple ancient Tibetan breathing technique. This technique he demonstrated to the author who practised it every day until by the end of the cruise he claimed to have felt ‘a hundred times better’ than when he went on board! We will quote Mr Bruce-Barker:
It changed my life completely. I was once again keen to go places and do things. To take part again in activities I had long ago abandoned. In short, I had recovered once more the joy of living.
This breathing technique did not, however, cure the author of his ailment and neither does it claim that it will cure the reader. But it can, he says, bring renewed energy and zest for life and freedom from the miseries of respiratory problems. His message is clear: YOU NO LONGER NEED TO LET BREATHLESSNESS ROB YOU OF LIFE’S PLEASURES. You can bring the situation under control and get more out of life. 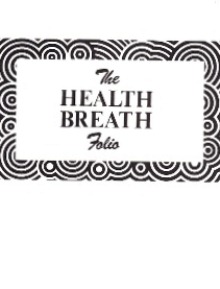