COMFORT AND REASSURANCE FROM THE SPIRIT WORLD

Comfort and Reassurance From The Spirit World

Miraculous Help From Your Spirit Guides

At last you can have the proof that (a) not only does the spirit world exist, it (b) can also help and guide you in this life!

A MAN RECEIVES IN AN INSTANT THE SOLUTION TO AN INTRACTABLE PROBLEM WHICH HAD ELUDED HIM FOR MONTHS WHEN HIS LATE FATHER ‘VISITED’ HIM!

A YOUNG WOMAN WAS SAVED FROM ALMOST CERTAIN SERIOUS INJURY AFTER A VOICE URGED HER ‘TO GET OUT OF THE KITCHEN’!

Another woman heard a voice which said play bingo the following day. She was very glad she followed the advice!

An investor claims to consult his spirit guides regularly about his holdings. He claims the value of his investments has risen sharply when previously it was stagnant.

Author Bill Major urges the reader to suspend disbelief and try his simple methods for proof of the existence of the spirit world! ‘I AM NOT ASKING YOU TO BELIEVE IN ANYTHING THAT YOU FIND RIDICULOUS. I ASK ONLY THAT YOU HAVE THE COURAGE TO BE OPENMINDED AND GIVE IT A TRY’, says Mr Major.

And it takes only minutes to find out!

‘For 25 years I have been in touch with the spirit world – and I have shown scores of others how to do the same – and never have my “Invisible Helpers” let me down.

‘NEVER AGAIN FEEL ALONE’, he says. ‘YOU HAVE NOT BEEN LEFT BEHIND BY THOSE WHO HAVE PASSED ON.

‘It is rubbish to say that “the departed” should be left alone – for anyone familiar with the methods I explain will realize that most of them are around most of the time! One can actually “see” them – but in the beginning they ignore us because they are used to being ignored by us!

‘They will respond once you learn to see them and ask for their guidance. The spirit world is both parallel to ours and completely different. You cannot possibly “disturb” them for they live in eternity whilst we are bound by finite time. Time for them cannot be measured.’

If you allow them, according to Mr Major, they will be willingly at your aid. He tells of a young woman immobilized by crippling back pains. She asked for healing and was cured immediately on the spot! The pains never to return!

The spiritual methods explained by the author are nothing if not simple – and also enjoyable!

We repeat: he doesn’t expect you to believe in this until you have seen the definite results for yourself! You could find yourself very happy indeed!

It’s simple – and safe. There is no harm whatsoever. You can attract only those who want to help you. In 25 years the author has never had one bad experience or heard of anyone who has contacted a spirit that was anything but loving and kind. ‘Scare stories are the work of the narrow-minded and have no basis whatsoever’, he says.

(Editor’s note: In reading this manuscript, even though I wasn’t actually using the methods, I sensed the presence of my late wife. I found it spooky and yet very comforting. It made me so happy.) 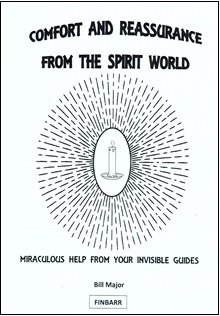