THE OPEN DOOR TO POWER

Many people feel beset by a sense of helplessness, feeling they have no control over their lives or what happens to them. They feel powerless. THIS FEELING CAN NOW END AT A STROKE, according to the author, a successful businessman who simply calls himself ‘The Gnostic’.

Based on a mystic Christian formula likely to offend ‘literalist’ Christians who do not understand the hidden meaning of the Bible.

The traditional Christian teaching is focussed on humility, but ‘in a world of imposing people and situations’, says the author, ‘what the individual needs is empowerment’. Humility doesn’t sit well with those who feel intimidated by others or large organizations.

How many people can actually say they feel genuine power? Few.

This monograph is not aimed at the person seeking worldly power in the sense of being a leader – although that is also possible but for she or he seeking an irresistible confident feeling that they can no longer be put upon.

This monograph offers real personal power. Instead of feeling helpless to change anything you can make all the difference.

This is not mere ‘self-confidence’. This is about receiving a sense of real power.

Finally the attitude of others toward you can change, claims the author, and neither will you have to accept the rubbish heaped on you by any large organization.

All can change, he says, without you making a fuss.

‘Personal power’ is something you either have or have not. It is an indefinable quality which commands respect from others.

Within this monograph is a Gnostic Prayer – so simple that it doesn’t even need to be learnt – which can give you, says the author, a sense of power in an instant.

THIS IS BEYOND POSITIVE THINKING. Not auto-suggestion. Based on a timeless spiritual reality. Try it. 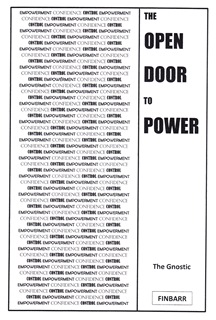