How To Get Even
Description

Indeed I have! Over and over again!

Like many mortals my life has been characterised by huge blunders for which it was hard to forgive myself – or to forgive others.

But unlike most, these blunders, transpired to be, 'rust turned to gold'.

I stumbled on this 'technique' – if it can be called that – years ago. I didn't find it in any book.

IT CAN WORK POSITIVELY AND DRAMATICALLY FOR YOU.

We all do things we regret. We may sell something for too little, buy for too much, get taken in by someone we trusted, and any number of other things which make us feel bad about ourselves.

We berate ourselves in anger and despair. 'How could I be so stupid?', 'Why didn't I see it coming?' we say.

Sometimes the pain can be unbearable. Sometimes we may feel we want to kill those who have betrayed us.

It's a horrible feeling. It's a cliché – we are 'only human', we are bound to make mistakes. But knowing that doesn't help, for we still have to live with ourselves and the consequences.

I have made some massive gaffes, too big and too embarrassing to admit to even many years after.

BUT I HAVE FOUND A WAY OF MAKING GAFFES, BLUNDERS AND PLAIN STUPIDITY WORK SOLIDLY IN MY FAVOUR.

This is not to say that making mistakes is a good thing. Certainly not – they always undermine one's self-esteem. And as you get older and more experienced hopefully mistakes become less common. So you hope!

I HAVE WRITTEN THIS SHORT WORK TO EXPLAIN HOW YOU CAN MAKE YOUR MISTAKES PAY OFF – HANDSOMELY!

This technique is practical. It is not based on any mystical or spiritual formula.

There is no ritual to follow. No visualisation. No mind power. No meditation. No prayer. Not any of that.

So potent is it that you need never fear making mistakes again. I try not to make them – for I don't want to go on feeling stupid for the rest of my life – BUT I KNOW THAT IF I DO I AM GOING TO COME OUT AS A WINNER EVERY TIME – AND WIN MORE THAN I LOST IN THE FIRST PLACE.

That pretty much sums it up.

The odd thing about this is that you have to feel really bad about yourself for it to work!

THIS BAD FEELING TURNS THE SITUATION AROUND – although for most of us it leads only to anguish and despair.

YOU NEED NOT FEAR FAILURE EVER AGAIN.

YOU NEED NOT FEAR MAKING MISTAKES.

(By 'mistakes' I mean the big ones – the ones that make us feel really bad, not the trivial mistakes of everyday life which simply annoy us and are quickly forgotten.)

THIS IS NOT SOME VAGUE SPIRITUAL IDEA. It is solid, workable.

IT CAN MAKE YOU FEEL LIKE A MILLION DOLLARS.

I felt this way many times, so exhilarated it has made me, and I even wind up thinking, 'Wow! I'm so glad I fouled up the way I did!!'

THIS GOES BEYOND MERE 'POSITIVE THINKING'.

Positive thinking is good for getting you through life, but when you foul up you can't feel positive.

Most of us are angry about something. It may be something somebody did, which left us feeling demoralised or worse. Or we've simply been stupid creating difficulties we're now stuck with. It can be any number of things.

THIS ANGER, THIS SENSE OF FRUSTRATION, CAN NOW BE MADE TO WORK IN ONE'S FAVOUR AND PRODUCE THE UNEXPECTED.

Take it from me, it can.

I've been an expert on cock-ups, miscalculation; be it financial or relationships I've fouled up. But along the way I stumbled on this 'trick' which saved me from total despair with myself.

THIS IS NOT HYPE. NOT A FALSE PROMISE. I HAVE FOUND THIS 'TRICK' THE HARD WAY – THROUGH TEARS, ANGUISH AND SELF-LOATHING.

I know all about mystic spells and the like – they have their place, but what do you do when you've made a complete fool of yourself, done something which you can't forgive yourself for?

It may not be that serious. Yet we all do things which we deeply regret – they may not be life-threatening, but we still wish they never happened.

ALL THIS CAN NOW BE PUT IN ITS PLACE. You cannot alter the past, but you can make your future much better.

Some of my own mistakes have unwittingly led me to making a great deal of money!

Mistakes in health and relationships have turned out in my favour!

I do not now dread loss – for if I do lose I know the knack for turning it solidly to my advantage, AND USUALLY I GAIN OR WIN MORE THAN I LOST IN THE FIRST PLACE.

ALL THIS I HAVE FOUND ONLY POSSIBLE THROUGH THIS TECHNIQUE.

I cannot quantify its value to me, for how do you put a price on seeing despair go to triumph – sometimes within a matter of hours?

I've called this booklet 'I Goofed! I Gaffed! I Won!, but I could have just as easily called it 'Getting Even'. 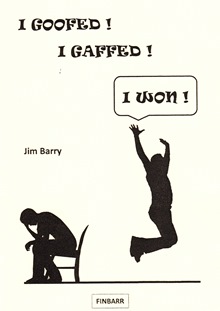