Numbers and their amazing effect on luck
Description

'I never knew my real lucky number until I read this'

If you can count from 1 to 9, you can use this book!
No rituals! No visualization! No mind power!
If you can count from 1 to 9 , that's all you need! You don't have to worry about numbers above 9!
Never has the secret art of numbers been made easier or plainer!
FIND OUT ONCE AND FOR ALL YOUR TRUE LUCKY NUMBERS!
All luck revolves around numbers 1 to 9!
In this easy-to-follow book, numerologist J. DeVille tells of how a woman always plans the dates of important appointments to ensure a successful outcome.
Each date is governed by one of the nine numbers, be it the 9th or the 27th.
Why will something work one day, but not the next? Because of numbers!
When the wrong number is chosen - which most of us do, then our chances of success are only 1 in 9!
You are nine times more likely to fail than succeed!
That ratio can be turned on its head!
THE DIFFERENCE BETWEEN A SUCCESSFUL SURGICAL OPERATION AND A FAILURE COULD ALL DEPEND ON THE DATE AND HOUR!
Of course, dates are often given to us over which we have no control - the author shows how to circumvent this problem.
Numbers are more vital than astrology, bio-rhythms, or any other cyclic process. THEY DOMINATE OUR LIVES, AND MOST OF US NEVER KNOW IT!

MAN LIVES FROM GAMBLING!
His speciality is the roulette wheel, for it is one of the casino devices in which it is genuinely possible to win. The book tells how he found his lucky numbers. He has not had to work for years, but he does need to travel a lot, for he cannot keep going to the same casinos!
Another man won the raffle prize for 8 consecutive weeks until he was banned entry by the organizers!

WOMAN FINDS TRUE LOVE!
She had had many boyfriends, but could not find Mr Right. But 'Mr Right' was there under her nose, whom she could only discover by comparing birth numbers. His number matched hers. She began to take him seriously, the relationship blossomed, and now they are very happily married.
YOU WILL BE ASTONISHED AT WHAT A DIFFERENCE KNOWING YOUR LUCKY NUMBERS MAKE!
The author's simple instructions has its source in the ancient Chaldean texts and works time and again!

A widow distressed by her overdue mortgage payments, used the 1 to 9 formula when she entered the local lottery. She immediately won $355, but much more was to come: 3 weeks later, she scooped $32,359, and a month after that, $1651! Anxiety about her mortgage is now a thing of the past!

A woman in Omaha, Nebraska, could barely scrape by on her late husband's SSN until she put the 1 to 9 formula to work.
She won $27,600 after two weeks and $150,000 two months later, in between several lesser winnings - all on the state lottery!

A young Quebec man loved the races, but was sustaining heavy losses and was in danger of being declared bankrupt. The author showed him how to find his lucky numbers, for he had been using the wrong numbers. IN ONE WEEK, HE PICKED SIX WINNING HORSES AT THE TRACK, NETTING HIM OVER $200,000! He has not looked back since!

A dice player at Las Vegas used his single digit birth number: the first roll came up 11. He tried again and again 11 came up. The third roll was also successful, and as he had let his $10 remain on the 11, his small investment brought him a tidy sum!
THIS BOOK REVEALS HOW TO PLACE BETS, MAKE DECISIONS, INVESTMENTS, PURCHASES ON THE RIGHT DAY... EVEN THE RIGHT HOUR!
This makes the difference between success and failure!
Why do numbers effect us so? Who knows, but they do. A careful examination of numbers in one's own life can be most revealing. The first place I lived in was No. 7, I began primary school on the 7th, entered college on the 25th (2+5=7), got married on the 14th (double 7), and so on - yet if I use 7 to bring luck it won't work! I only cite my example to demonstrate the correlation between life and numbers: but 'lucky' numbers are another thing!
IF YOU HAVE NOT BEEN LUCKY THEN MAYBE IT'S BECAUSE YOU HAVE NOT DONE THINGS AT THE RIGHT TIME OR HOUR, NOT BECAUSE YOU ARE A FOOL, BUT SIMPLY BECAUSE YOU DIDN'T KNOW THAT NUMBERS CAN MAKE ALL THE DIFFERENCE.
A child can follow this book. If you can count 1 to 9, you can use it. YOU WILL BE AMAZED AT THE DIFFERENCE IT CAN MAKE TO YOUR LIFE. 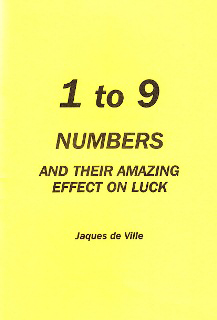