HOW I CURED MYSELF OF THE INCURABLE

ORDER THIS BOOK TODAY - IT COULD SAVE YOUR LIFE!
Description

Doctors Said It Couldn't Be Done:

'HOW I CURED MYSELF OF THE INCURABLE'

Author Peter Nichols was given an ultimatum of extensive open-heart surgey or 'face the consequences'.  He was gripped with fear, for he remembered how two years earlier his friend Fred De Galen was faced with the same ultimatum for the same problem.  They told Fred he had nothing to fear from the surgery, that he would be back at work after six weeks.  Fred never returned to work.

Doctors say surgery is the answer, but as often as not it can be just the begining of one's troubles!

Readers please note: THIS IS NO ORDINARY 'HEALTH BOOK'.  It is not a dry, wearisome compendium of facts and statistics.  Instead this book reads more like a novel: IN FACT THE MOMENT YOU OPEN IT YOU WILL FIND IT NIGH IMPOSSIBLE TO PUT IT DOWN! Our editor normally spends several days reading an author's manuscript, but this one she read from start to finish in one sitting, so rivetted was she by its content and presentation.

This book will shock you.  If Peter Nichols had listened to his doctors he would probably have ended up as a cripple... or worse!  he decided to bring himself back from death's door BY LEARNING TO LET HIS BODY HEAL ITSELF!

FOUR YEARS AGO HE COULD NOT EVEN WALK WITHOUT DOUBLING UP IN PAIN.  TODAY, AT AGE 56, MR NICOLS, TO QUOTE HIS OWN WORDS, 'JUMPS AROUND LIKA A TEENAGER'.

Not only has he regained glowing health, he has also entered a second youthood, all thanks to the exciting health discoveries he made after rejecting his doctors advice!

Mr Nichols was racked with advanced heart disease: he was told that 'at least 4 bypass surgery' was needed to save him.  He was as close to the end as anyone could be.  At age 52 he could have died a premature death, like thousands of victims of heart disease.  BUT MR NICHOLS' AMAZING HEALTH DISCOVERIES ARE NOT CONFINED TO HEART DISEASE ALONE - THEY CONCERN EVERY SERIOUS CONDITION OF POOR HEALTH, ESPECIALLY WHAT IS LABELLED 'INCURABLE' BY THE MEDICAL ESTABLISHMENT!

Order this book today - IT COULD SAVE YOUR LIFE! 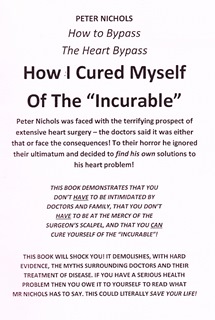