Technique For Health And Wealth
Description

ORIENTAL ENERGY TECHNIQUE FOR HEALTH AND WEALTH
by James Deacon

The author suffered seemingly without end from colds and influenza until he discovered the Oriental Energy Technique. With this technique he also banished hay fever … avoided surgery on his knee … and became stronger and fitter every way.
The technique can be performed by anyone of reasonable fitness, being a fusion of exercise and concentration.
YOU CAN DRAMATICALLY STRENGTHEN YOUR IMMUNE SYSTEM, says the author. You can also lower blood pressure.
People in Japan died of radiation after the atomic bombing of Hiroshima and Nagasaki – yet there were also people who remained unaffected.
The author applies the same technique for MAKING MONEY ON THE STOCK MARKET! He had no previous interest nor experience of the stock market!
The technique can be used to obtain anything you desire, he claims!
‘I have studied the occult from the age of 16 and as yet have found nothing as powerful as this’, he says. 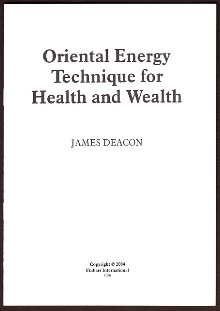