It is central to mystic Chinese belief that the body's energies correspond to the energies of the universe. What isn't generally acknowledged is that these same energies can affect our financial fortunes!

In 2009 Chinese magnate Tong Chi submitted to clinical trials with the department of psychology of the University of Taiwan to test his claims that 'stimulating the correct pressure points of the body stimulates one's financial prospects'.

Gently applying pressure to the nose in particular can have a decisive effect!

'In effect', says Tong, 'one becomes a money magnet. I call this technique “cashupuncture”.'

According to a newspaper report (Weekly World News, January 25, 2010), Tong 'whose vast wealth has baffled observers for years has finally revealed his money-making secret'.

In the clinical trials, 100 test subjects were trained to stimulate the acupuncture energy points in their nose. After one year 40 had become 'very rich' whilst 45 had doubled their income. The remaining 15 said that they were 'modestly better off' than before.

The technique is easy to apply and must be performed every day. This monograph by Liu Xun reveals Tong's exact instructions for: obtaining a job or getting a promotion; coming into a large inheritance; hitting the lottery jackpot; getting a big tax refund.

It is easy, simple, and safe. 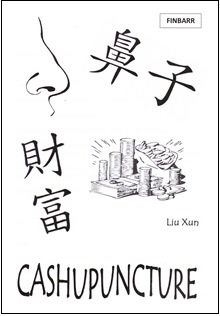