At last you can have:
* Cash every time you need it!
* Immediate admiration of another person!
* Instant control of difficult situations!
* Sudden luck in games of chance!

Why merely dream of what you want in life when - right now, for only a few minutes' effort - you can have what you desire, literally within hours!
This is only 'impossible' in the normal course of life - but when you have direct contact with the Invisible World wishes can be made to come true in no time at all!
Whatever you seek: a new car... the love of someone who is indifferent... money coming in every day of the week... whatever it is that will improve your life can now be made to happen - and in faster time than you ever dared think possible!
Within moments of performing simple CMP Chants you will actually receive proof that your wishes are going to be granted!
And in the new book, 'CMP Chants: Doorway to Endless Miracles', which reveals these wonders, you will be given absolute proof of the existence of the Invisible World by BEING ABLE TO ACTUALLY SEE AND TOUCH IT!That's right! You will be actually able within minutes - to touch and feel what was previously invisible to you!
AND ONCE YOU RECIEVE THIS ASTOUNDING PROOF YOU WILL KNOW THAT THE 'IMPOSSIBLE' CAN BECOME POSSIBLE FOR YOU!
Right now - at this very moment - everything you desire is held within the Invisible World. From time immemorial mystics and sages have believed that all material things originated in the unseen spheres of existence.
This book shows how to contact the Invisible World directly in order to make your desires materialize quickly and without fail!
Do not make the mistake of thinking that because you have no means of getting more money that you cannot recieve it: it is already there WAITING FOR YOU TO ASK FOR IT!

MONEY OUT OF THIN AIR!
When Helen B. from Sydney, suddenly received $1000 from a relative she had not seen for 27 years it seemed like money out of thin air! Yet this is what happened after her chants were heard by the Invisible World!

Joe B. from Toronto, had lost his job, his marriage was shaky; and he had debts of $900. The author explained to Joe how to use CMP Chants; the result - his debts were wiped out immediately! He won $700 on bingo and the horses; and a week later he received an expensive stereo absolutely free! His marriage was also saved.

AUTHOR FINDS GOLD VERY NEXT MORNING!
Carl Nagel, prospecting for gold, through CMP pictured a gold nugget in his hand. The very next morning as soon as he started panning he found a gold nugget!
Anything you desire, says Carl can be literally materialized out of thin air through CMP chanting!

ANY MAN OR WOMAN CAN BE YOURS!
Who has not known heartache at one time or another of desiring a person who did not share the same feelings, or worse, was completely unaware of one's existence? This can now be a thing of the past when you use CMP Chants.

Young Linda L, a clerk, was very interested in a handsome young bachelor who worked in her office. 'He's everything I ever wanted in a man' she beamed. 'But he's not interested in me. It's not as if I haven't made my feelings known, but you'd think I was invisible. I'm distraught, and my work is suffering. Can you help me?' Carl gave her the Chant to Win Love. 'The very next day', Linda reported, 'he asked me to lunch... 3 weeks later he proposed marriage to me!'

Tom T., a lonely young man, used CMP Chants only once: to attract the attention of a woman at the place where he worked. Previously she had never given him a second look, but overnight she made it known to all concerned, that she wanted to become his 'special friend'.

Linda, Tom, and many others who have followed Carl's advice, never believed that their dreams could come true merely by chanting a few simple words!

NO MORE BAD LUCK - ONLY HAPPINESS AND GOOD FORTUNE FROM HERE ON!
Michael K. came to Carl feeling very low. All his life he had been interested in mystic powers, but he could never get results. He felt he was one of life's 'unlucky ones'. He experienced an immediate improvement in every area of his life as soon as he used CMP Chants.

Jim T. was another student of metaphysics; but after 35 years of interest in the subject he was just as poor and as unloved as ever. After using the author's instructions he wrote, 'These chants work like a house on fire!'
But how could Jim suddenly become so lucky after a lifetime of failure? The answer to this you will find in Carl's book.
You need never lack for anything again once you begin using these amazing Chants. From now on receiving what you want from life will become automatic as breathing the very air around you.
The secret is so simple. And you don't need candles, oils, or equipment of any kind! All CMP Chants are in simple English, and can even be said silently in you mind, if you so wish.

FREE!
POWERFUL MYSTIC PRAYERS THAT GET ANSWERED!
Never revealed before, the actual secret prayers that can bring love, money and health! Actual prayer for: WIPING OUT DEBTS!... PEACE OF MIND!... HEALING OF HEALTH PROBLEMS!... BRINGING BACK A LOVER. Testimonials from readers prove that these amazing prayers work. Usually sold for $7.50, this publication by N. Arrol is yours free to keep when you order 'CMP Chants'

AMAZING CMP CHANTS BRING:
* Unending flow of cash
* Power to influence people
* Admiration of opposite sex
* Instant luck in bingo & lotto
* Gifts, jewels, prizes - seemingly out of thin air!
* Peace of mind and happiness
* Protection against evil eye
* Healing of mind and body
* Wins at the race track
* Improved self-confidence
* Discovery of what others are thinking

MEET CARL NAGEL
Carl Nagel is living proof of the efficacy of his teachings. Once a lonely, shy, and unemployed young man, his life changed completely when he discovered the secrets revealed in this book.
His dreams, thanks to CMP, have been fulfilled: he had always wanted to be a writer - he has since published 7 books. He never had luck attracting women - now he has a job to keep them away! he had always wanted to travel: since his amazing mystic discoveries he has travelled the world, including the fulfilment of a lifelong dream to go to London, England (Carl is based in Australia).
People from all over the world now come to Carl for help. One typical case is Vivian B. who had suffered depression for most of his life. He was on the verge of suicide. he wrote to Carl in desperation. All it took was Carl's simple CMP Chants for him to feel an immediate, dramatic improvement. Today he is a new man.
A teenager from London found her life a misery from so many health problems. Nothing seemed to help her. She wrote to Carl - the amazing results you will read about in this book!
Carl's students and correspondents are experiencing new lives, thanks to CMP Chants: they are taking control of their lives and their destinies. 'Miracles' have become a way of life for them! 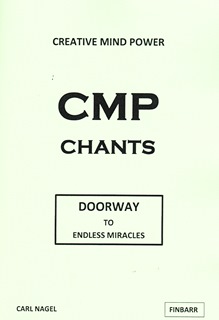