Actual chants & invocations that control the luck forces of the Cosmos.
Description

Here are the actual CHANTS & INVOCATIONS that control the 'luck' forces of the Cosmos!

Just for a few minutes of your time each day you can INVOKE the spirits that control good luck!
MAKE OTHERS OBEY!
REPEL EVIL!
PUNISH ENEMIES!
ENJOY LIFELONG PROSPERITY!
ATTRACT AN ADORING MATE!

Since Larry Hool published these COSMIC POWER invocations a few years ago he has been inundated with testimonials. THESE CHANTS WORK!
They control the forces of luck!
One lady wrote that she won $800,000 on a Treble Chance Win after she performed the Cosmic enchantment!
Another lady was able to pay off her crippling debts within a month after using the Chants to Bring Success.
One man said he escaped paying $36,000 in a law suit after reciting the incantation to Win Legal Action.
Jim B (Orpington) wrote that he got a well-paid satisfying job after a year out-of-work when he performed the Chant to Bring Success.

Everything you need to know is explained in simple detail by Mr. Hool.
The Chants & Invocations are simple to do, and yet have been proven to work time and time again!

THE COSMIC POWER INVOCATIONS AUTOMATICALLY BRING YOU MONEY, POWER, POSSESSIONS, HEALTH ... AND MORE!
They invoke the eternal spirits of the Cosmos - the very forces that control the element of chance!

YOU CAN CHANGE YOUR LIFE FOR EVER!

A lady wrote that she performed the Invocation Against Evil to deal with a person who had been making her and her family's life a misery for years; within a month she had the tables turned on him, and soon he disappeared completely from her life!
Nona A. (Leicester) wrote that the Uncrossing Ritual worked immediately in banishing an evil influence that had been haunting her.
Wendy K. (East Grinstead), miraculously got the man she wanted after performing the Chance To Win Love.
Another lady won her husband back from a younger woman by using the Incantation to Rekindle A Mate's Interest.

Fred B. (Washington DC) reported that his crippling arthritis went OVERNIGHT after he performed the Chant to Bring Good Health! Amazing, but true.
Sally G.(Newmarket) victim of a mysterious illness for over a year was CURED COMPLETELY in 3 weeks after performing the same chant.

THESE COSMIC POWER CHANTS AND INVOCATIONS HAVE BEEN ATTESTED BY MYSTICS EVERYWHERE! Why they work nobody knows, but work they do - silently and quickly!
Anybody can do them! Mr Hool in his booklet explains: HOW TO PREPARE FOR YOUR COSMIC POWER RITUAL - THE 3 STEPS TO SUCCESS - WHY YOU MUST SUCCEED - THE COSMIC POWER OPENING RITUAL - INCANTATION FOR OBTAINING A CAR - THE UNCROSSING CHANT TO RID EVIL INFLUENCES - THE COSMIC POWER DEFENCE RITUAL - EXORCIST CHANT TO REPEL EVIL SPIRITS - THE SUMMIT SENTRY RITUAL TO PROTECT YOUR HOME & POSSESSIONS AGAINST BURGLARY, THIEVES & VANDALS.

A Chicago man reported winning 6 horses in 6 races after reciting the Cosmic Power Chant!
One lady foresaw a winning lottery number and scooped $256,000.
Diana T. (Enfield), found that malicious rumours had been spread about her - she turned to the Cosmic Power Defence Chant and the culprit responsible came begging forgiveness!

These powers cannot harm you. They will work for you over and over again, says Mr. Hool - unfailingly! Results can be observed within weeks, or even days, and sometimes within hours, he says! Just follow his simple instruction and the COSMIC POWER Invocations, Chants & Incantations will do the rest! 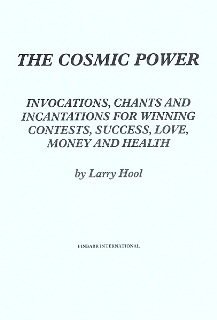