LETTERS FROM AN OCCULTIST

Here in book form is a compilation of personal correspondence between author and persons in need of his occult expertise.
Description

LETTERS FROM AN OCCULTIST

Here in book form is a compilation of personal correspondence between author and persons in need of his occult expertise.  The author is master-occultist Marcus T. Bottomley and his correspondents are people who sought his help in solving financial, love and miscellaneous problems during the period 1979-82.
In the pages of this warm, human and instructive book are stories such as the woman distressed by the theft of a precious necklace.  Another woman finds herself in a dilemma concerning the cruel, violent behaviour of her husband.  her minds says she should leave him, but her heart won't let her go.  Her interest in occultism prompts the thought if it could be possible that his behaviour be changed by magickal means, rather than face heartache?  The author counselled her that a woman can make a man do ANYTHING with the powers of magick at her disposal!  He prescribes a potent formula for her use which almost overnight leads to an extraordinary change in the husband's behaviour for the good!
A man fairly successful with occult operations, couldn't get his knowledge to secure the affections of the woman he loved.  The author's answer was that what he knew about such matters was not enough and that only a special magickal formula could give him the 'push' for the success he needed.  It did the trick!  A month later the man reported that the lady in question had fallen head over heels for him!  This same formula incidentally, can be used by women to attract the amourous attentions of disinterested males.
Every letter of the author's contains vital information for making magickal operations successful.  For many people occultism is fruitless and disillusioning, borne out by the correspondence published in this book.  Mr Bottomley believes that work and effort are required to make rituals effective.  If there are no results then, he says, a shift of emphasis is required.  Examples of the kinds of changes needed are delineated.  A case is described of a man, in dire need of help, who didn't know which kind of magickal practice was necessary for his particular situation.  He was the defendant in a criminal proceeding in which the odds for a "not guilty" verdict were very slim.  A special ritual supplied by Mr Bottomley brought about an amazing "supernatural intervention" for this man.
Not all of us, thankfully, have such unpleasant problems to cope with.  The more"mundane" wish of an ambitious man after a big job promotion for which there were many applicants, is the subject of one letter to the author.  The reply was that, instructions properly followed, magick would secure the job with no difficulty.  The advice was correct as this very happy correspondent letter reported.
Applying magick for strictly selfish ends is considered "unethical" by some.  Ethics are discussed with correspondents in this book and certain interesting observations are made.  Also, the time required to attain results is a recurring theme.  One letter describes how it took a rejected husband only one week for the author's advice to make his wife show up at the door.  Another ritual, of a more "advanced" nature took nine months to help a businessman, but it was worth the wait - he became many times more prosperous.
Simple magickal practices for winning lotteries, games of chance, etc. are supplied buy the author, as are magickal methods for building wealth, influencing opposite sex, in addition to other situations of interest to most readers.
If you are dissatisfied with occultism then you should have this book.  It will put you on the right course.  In its pages are the right ways for succeeding.  You will find magickal wisdom of a kind not normally so accessible in "ordinary" occult books.  Whatever your need or problem the answer for it solution can be found here. 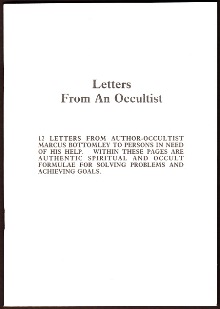