Here is a modern wizard's own secrets for casting spells and performing magickal rites which get results!
Description

Magick changed Carl Nagel's life - from a shy, retiring unknown person to a Wizard who enjoys popularity, fame, money, all thanks to his use of the magickal arts! Anybody can do it, he says - anyone with the desire to change a life of dissatisfaction and bad luck for a life of power, money and influence!

'I HAVE LONG COME TO THE CONCLUSION' says Carl. 'THAT LIFE IS INCREDIBLY UNJUST. NO MATTER HOW HARD YOU WORK YOU REMAIN POOR. NO MATTER HOW HARD YOU TRY TO WOO SOMEONE OF THE OPPOSITE SEX SOMEONE MAY BEAT YOU TO IT. I AM CONVINCED THAT MAGICK IS THE ANSWER TO THIS UNJUSTICE. MAGICK GIVES YOU INVISIBLE POWER AND A CLEAR ADVANTAGE OVER EVERYONE ELSE. NOBODY SUSPECTS YOU OF USING IT: SO NO ONE KNOWS WHY YOU HAVE BEEN GETTING ALL THE LUCK AND "EASY BREAKS" IN LIFE'.

When Carl sought the favours of a certain young lady he didn't trust his 'manly charms' to get his way; and he didn't want to leave things to chance. He performed the Occult Seduction Spell to get the desired result: WITHIN 24 HOURS HE HAS HER WITHIN HIS ARMS!

Carl keeps a diary of his magickal workings. Here are typical exerts:

Jan 2: F.K. wronged me. I performed the Invocation of Attack to get even. Jan 9 F.K. had two minor accidents.
Feb 1: Cash running low. Could do with some luck in gambling. Performed the Invocations to Win at Gambling. Feb 4 won several prizes in bingo; four days later won $200 on the lotto.
Feb 2: I invoked the spirit of a dead witch through the Necromantic Conjuration Ritual. Immediately felt her in the room with me. She gave me the instructions that I wanted about the Astral Planes.
Feb 15: Could do with some more money; turned to the Middle Pillar Rite. Two weeks later received money from a government department.
Mar 4: Desire to astral project to London, England. performed the Ancient Invisibility Rite and achieved a satisfactory result.
Mar 6: Did the Ancient Success Rite just for the hell of it. Same day found $20 on the street; met old acquaintance who owed me some money - he paid me back in full!

Carl generally expects magick to work for him within two weeks - it all depends on the objective desired, but sometimes it can work within hours!

This is just not another book of spell and rituals, but a complete working manual of ancient magick, right from beginner's stage to advanced!

This book is the result of SEVEN YEARS INTENSIVE RESEARCH INTO THE OCCULT ARTS - SEVEN YEARS EXPERIMENTATION TO SEE WHAT MAGICKAL SPELLS WORKED AND WHAT DID NOT!

That is why this unique book is called 'Carl Nagel's Treasury Of Magickal Secrets, Spells and Potions' as it represents what Carl has found works for him!
As soon as Carl found magick working for him he wanted to build a treasury of secrets which he could constantly turn to for continual success in life. As a serious student of occultism he found that most old magick books contained near-impossible to perform rituals which involved long and laborious preparations, and then they wouldn't work! Undeterred Carl kept trying - the results of which have been published in the other books he has written; but in this book he has presented a COMPLETE PRACTICAL WORKING SYSTEM FOR CONSTANT SUCCESS WITH THE OCCULT!
Do you need money in a hurry? Carl's instructions can get it for you. Would you like to be apparently invisible so that you could enter someones room entirely without their knowledge and see and hear what they do? This book shows you how to do it. THIS IS NOT THE KIND OF INFORMATION YOU WILL FIND ELSEWHERE. Do you seek information from the dead? You can perform the Necromantic Conjuration Ritual in your own home with complete safety - this is not spiritualism and is more powerful!
Carl used this ritual to contact the spirit of Aleister Crowley who gave Carl much of the information ha has used in this book.

Carl will also show you how to invoke the hermetic power of the Golden Dawn - INSTRUCTIONS NEVER REVEALED BEFORE!

'Many people are acquainted with the Middle Pillar Ritual', says Carl, 'but how many people know how to use it for success in life? Perform it on a daily basis and your entire life can change for the better. People will become more friendly towards you... affairs of both heart and business will run more smoothly, mental depression will gradually disappear and leave you forever. I know this to be a fact from my own personal experiences'. And all this is just from one ritual performed regularly!

Do you desire to know the Secret Names of Power that can release great power into your life? Carl gives you those names that can put the cosmic forces of the universe on your side.

Have you tried spells and rituals before without success? Here Carl gives you the Five Great Secrets to Magickal Success: instructions that will ensure that your future occult endeavours are successful.
DO YOU SEEK SUCH POWER THAT CAN MAKE PEOPLE SEEM LIKE PUPPETS IN YOUR HANDS WHEN THE OCCASSION DEMANDS IT? DO YOU SEEK INVISIBLE POWER OVER BULLIES AND PEOPLE WHO ABUSE THEIR AUTHORITY? DO YOU SEEK THE ASSURED LOYALTY OF A LOVED ONE? DO YOU SEEK SUCH POWER THAT YOU CAN ACTUALLY HARM SOMEONE WHO HAS UNJUSTLY WRONGED YOU?

If you are serious, you can have all this - and MORE!

Oddly enough these are reasons why you are unlikely to ever find this book in any bookstore; and in fact you may never see it advertised in any magazine: SIMPLIY BECAUSE MOST PEOPLE - EVEN IN THE OCCULT WORLD - DISAPPROVE OF THIS KIND OF BOOK BEING AVAILABLE. And why do they disapprove? BECAUSE THEY KNOW THAT WHAT IT CONTAINS IS POTENT!

In a sense this book is banned - and not because it is 'evil', but because it contains REAL POWER for the reader!

We believe that this book should be available: LET THE READERS DECIDE FOR THEMSELVES! AND THEY WILL KNOW WHEN THEY READ IT THAT HERE - AT LAST - IS REAL, POWERFUL MAGICK, AS USED BY THE ANCIENTS BUT NOW SIMPLIFIED. AND FROM THE PEN OF ONE WHO HAS PRACTISED ALL HE HAS PREACHED: CARL NAGEL.

Here is a partial outline of this amazing book's contents:
* Elementary Magick
* Minor Ceremonies and Rites of Initiation
* The Development of Clairvoyance
* Control of Thought
* Creating a Ritual Room
* Power of the Planets
* How to Increase Your Chances of magick Success
* Physical and Emotional Preparation
* Ritual of Purification
* Five Gates to Magickal Power
* The Lesser Banishing Ritual of the Pentagram
* The Middle Pillar Ritual
* How to Use the Middle Pillar Ritual to Materialize Desires
* The Ancient Art of Necromancy
* Necromantic Conjuration Ritual
* An Encounter with the Spirit of Aleister Crowley
* Intermediate Magick
* True Meaning of Dreams and Visions
* Money Magick
* How to Attract Money and Good Luck
* Love Magick
* Occult Seduction Spell
* Vengeance Magick
* Invocation to the Spirits of Mischief
* Punishment by Effigy
* Invocation to Attack
* Ancient Revenge Rite
* Ritual to Dispel Love
* The Magick Circle of Protection
* Ancient Success Rite
* Miscellaneous Magick
* The Mirror of Solomon
* Guide to Herbal Remedies
* The Magickal World of Amulets
* Talismans - What They Are And How To They Can Change Your Life
* Ancient Invisibility Rite
* Adventures Beyond Three Dimensions
* The World of Elemental Spirits
* The Power of Ancient Egyptian Magick
* Invocation to the Spirits of Fire
* The Complete Talismanic Power Ritual
* Advanced magick
* Case Histories
* Personal Experiences, etc 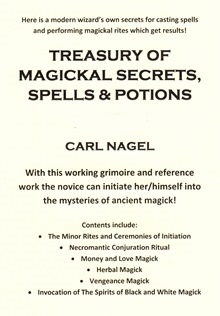