Follow this booklet, burn a candle, and let the heavens smile on you!
Description

YOU CAN WIN IN LIFE

‘I did the rite for winning contests … a week later won £1000 on a raffle!’
‘Since I started using this I have won a 14-day holiday in Florida, a 7-day holiday in listed “Best Western Hotels”, and won £1250 British Airways vouchers … I am astonished as I have never won anything before.’
‘For two years our house was on the market and as soon as we began the rite the house sold and we moved … (we have) received a huge grant to restore the place.’

J. Finbarr writes:
These are unsolicited testimonials and you can ask for photocopies of the original letters.
What testimonial could you write once you’ve tried Winning Candle Rites?
I cannot recall a time when candle rites failed me. Some might call me a ‘winner’ – but anyone can do these rites and get lucky.
From the earliest times people have burnt candles in the hope of making wishes come true. The candle’s flame carries our thoughts to the ether – and our thoughts come back as material realities!
A Manchester lady wrote: ‘I have had 4 wins in one week since (using these rites).’
Another wrote: ‘Did a rite for winning contests … this morning received a cheque for £1000 from a contest I had forgotten about.’
A Swindon lady wrote: ‘Ten days after (the rite) I received £350 out of the blue from a completely unexpected source. Coincidence, chance – possible. I think otherwise.’
Here’s what a West Midlands lady wrote: ‘(Since the rite) I have received an allowance of £182 per month, and last week received a rebate from the Inland Revenue for £5000.’
Another man wrote: ‘to say that I was surprised when I received £5000 in less than a week is an understatement! I had never won anything like that before.’
SHE GETS FIRST HOME!
According to this Sussex lady, ‘On the second day of the money rite I was accepted for my first home after trying for many years.’
Winning in life is not a matter of random chance – certainly not for those who perform Winning Candle Rites!
THIS BOOKLET SUPPLIES VITAL INFORMATION ABOUT CANDLE BURNING NOT FOUND ELSEWHERE – INFORMATION THAT CAN MAKE THE DIFFERENCE BETWEEN SUCCESS AND FAILURE!
One lady wrote that at first she was sceptical – I can send you a copy of what she actually said – but after doing the candle rite, ‘now I am in a new, better house which I badly needed, with the prospect of an even better one fairly soon.’
A Cumbrian lady described an immediate winning streak after starting Winning Candle Rites: ‘Just before Christmas I went to a “Prize Bingo” and won two prizes. Last week I received a letter telling me I had won a prize draw and had a chance of a BMW convertible or £20,000 cash (I took the money) … Last night I went to “Prize Bingo”, again won a prize … I was also made permanent in my job last November.’
OVERCOMES NERVES … PASSES TEST!
This Hertfordshire lady was convinced she was going to fail her driving test, ‘because I was so nervous. I cried before every lesson and had a terrible headache afterwards … (after the rite) On the morning of the test, I was a little nervous but my lesson went smoothly … When the examiner told me I had passed, I was overjoyed! All my friends were amazed, as I had told them all many times that I had expected to fail.’ (These are only extracts from her letter; the full content is in the booklet.)
RITES WITHOUT CANDLES
Not everyone can burn candles at home. The answer is supplied. If you lack the necessary privacy or cannot burn candles, you can still benefit and win in life.
You can change your luck – now and decisively!
Whatever your material needs, you can get results through my easy-to-follow instructions. With these instructions you can also FIND THE SOLUTION TO ANY PROBLEM – NO MATTER HOW DIFFICULT IT SEEMS!
Winning Candle Rites summon only forces of the Light. Follow this booklet, burn a candle, and let the heavens smile on you! 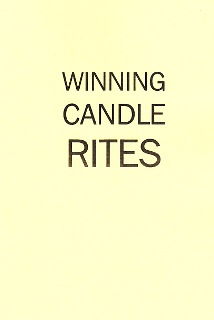