THESE SYMBOLS, FAR FROM BEING INANIMATE, ARE PULSATING WITH THE MYSTIC ENERGIES OF THE COSMOS!
Description

JIM SCHINEIDER'S LIFE WAS TURNED AROUND IN JUST 90 DAYS AFTER HE BEGAN USING THESE SYMBOLS.  HE WRITES:
The strange symbols illustrated here can have the most amazing effects on your life!
You will find them in the book "AMULETS: How they can change your life" by marcus bottomley, and it is about this book I write.
These symbols - or amulets - possess within them mystic energies as old as humankind itself.  Most people, including myself, do not understand what these energies are, but what is absolutely certain is that they POSSESS A STRANGE MYSTIC POWER WHICH HELPS THE PERSON WHO OWNS THEM.

I was at my wits' end when I found Marcus Bottomley's book.  Perhaps Providence guided me to this book at the very moment I most needed it.  I didn'y know which way to turn: I was faced with eviction from my home; my wife was seeing another man; and if these things wern't enough the company that I worked for had just announced that it was closing down!
The strange thing is that normally I wouldn't have even considered using amulets to solve my problems, as, frankly, I had always considered such things to be just so much rubbish.  But I was to be proved wrong.  I was now desperate and ready to try anything.  I followed Mr Bottomley's instructions to the letter, and carried the amulets on my person.
After 7 days my wife, against all expectations, stopped seeing the other man.  She said we should "stand by one another through our present problems".  It was as if a 100 tons were lifted from my shoulders when I heard those words!
And that was only the beginning of my changed fortunes! The eviction order was lifted and I was given more time to find the money for my rent arrears.
Then, out of the blue, I received a tax credit of over $2000.  This came about because my tax code had been mixed up a few years earlier and so, for a time, I had been paying too much tax without realising it.
By now I was really beginning to think that these amulets with their strange symbols were working for me.  No longer was I sceptical - so much hope had now entered my life that I didn't want to give up my new founf faith in them!
My faith was completely justified because no sooner had I received my redundancy papers was I offered a job with pay almost double what I had been getting before!
BUT HOW CAN INANIMATE SYMBOLS EXERT SUCH POWER?
This I cannot explain.  I can only say that since I have owned them I have known nothhing but good fortune.
Now I know that some people will say that this is all just coincidence: "Your good fortune would have come even without the amulets".  Maybe these people are right - and I too was once cynical, but I am not willing to give them up! Perhaps it is just superstition - but I know this much; since i have been using amulets I have never wanted for cash, my marriage became a happy one; and I enjoy comforts and pleasures that were previously always denied to me.
However, I am not the only one who feels this way about these mysterious symbols.  Since Marcus Bottomley's book was first publeshed a few years ago the publishers have received a never ending flow of testimonials. N.S. from Leeds wrote:
Nothing can stop me now, thanks to these amulets! Last week I was in a car crash with three people.  The driver was killed, and the other two people were seriously injured - but I escaped without as much as a scratch! I believe my staggering good luck was due to the Safe Travel Amulet in my pocket!
Another man, who had previously never won a single thing in bingo, wrote:
I had come to believe I was a born loser! The very first night I took the General Good Luck Amulet with me to bingo I won £200 in cash! Can this be coincidence? (P.K., London)
But before I tell you more I must make one thing clear; the amulets in Marcus Bottomley's book are not ordinary good luck charms.  Read what S.B. from Guildford wrote:
I have spent a small fortune on lucky trinkets and pendants but I can say they never helped my luck.  But when I bought your book I realised that here was something quite different; that the author gave specific advice for getting the symbols to work for one.
And there's the secret! The author of this book is an Adept of an esoteric lodge which have used these potent symbols for almost two centuries.  This secret lodge, whose identity the author is forbidden to reveal, was founded in London around the turn of the 19th century.  But these symbols are far older than 200 years - THEY ARE IN FACT MANY THOUSANDS OF YEARS OLD.
They go back to that remore time, before the rise of civilisation, when humankind realised what tremendous power lay hiddem in certain shapes amd forms.  With the passage of time these images were modified as humankind's spiritual consciousness evolved.
THESE SYMBOLS, FAR FROM BEING INANIMATE, ARE PULSATING WITH THE MYSTIC ENERGIES OF THE COSMOS!
And they will start working for you as soon as you follow Marcus Bottomley's instructions! these are not mere "lucky charms", but are higly individualized tools of mystic power!
Follow the author's instructions  and their power immediately attunes itself to fulfilling your needs!
You will find it a pleasure to follow this book's instructions, so simple, clear, and easy are they to apply.  There are no complicated rituals to perform.  And it includes NO LESS THAN 12 GREAT SYMBOLS OF POWER FOR AMKING YOUR DREAMS COME TRUE.
Please do not delay.  Why let the miraculous blessings of the Cosmos be denied to you for another day? 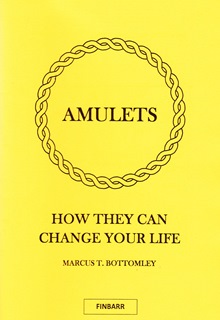