MAKE AN EGYPTIAN MAGIC BOX AND WATCH IT BRING YOU MONEY, LUCK, HEALTH AND LOVE!
Description

MAKE AN EGYPTIAN MAGIC BOX AND WATCH IT BRING YOU MONEY, LUCK, HEALTH AND LOVE!

It seems like something out of a fantasy, BUT THIS IS TRUE.  Now in his late 80s, Basil LaCroix (a.k.a. Basil Crouch) has decided to reveal the secret of The Egyptian Magic Box - a device that can change the course of your life!
But this is not simple magic - it requires time and commitment.  You are asked to call upon powerful Egyptian deities who will operate through your magic box.
The box has to be made by yourself and imprinted on it the magic words and symbols described in this book.
IN RELATION TO THE EFFORT, THE RESULTS CAN BE STUPENDOUS!
The reason why lucky charms and ready-made occult products may fail is that they are not made by yourself!
You can make a magic box! No experience is required! It is simple! The box has to be made like a pyramid, but it doesn't have to be accurately so! What is important is the concept - the idea behind it!
The box itself cannot have power - the power comes from your invocation of the mighty goddesses and gods of ancient Egypt!
THIS BOOK SHOWS YOU HOW TO DO IT - BUT IT'S ONLY FOR THE DEDICATED!
This is not for the easily intimidated! This is raw, potent magic for the person who desires power and riches!
Mr LaCroix reveals the secret rites and invocations of the Egyptian powers, and how to find the magic words that make them do your bidding!
At last, you can invoke that cat-headed Bast and the cow-headed Hathor of ancient Egypt! Invoke the Eye of Horus! These powers will bring what you want through the magic box.
The making of the box is simple.  The effect comes in imbuing it with cosmic power.  You can do this if you have the will - and the box will become a power more potent than any lucky charm.
Through their pyramids and invocations of the powers within, the magicians of ancient Egypy were able to command miracles of health and healing!
YOU CAN NOW POSSESS REAL POWER.  The power to heal yourself of disease.  The power to win.  The power to make money.  Power over another person.  the power to heal and help others.  Sex. Gratification.  Whatever you seek - it is within your reach when these awesome powers are awakened.
This is not mumbo jumbo dreamt up by an old man.  many will recall Basil LaCroix's mail order courses in magic and voodoo, not to mention his healing groups in South London.  He is descended from a long line of gypsies; the occult is in his blood.  He has studied and practised all his life.  he has now decided to reveal this most potent form of magic of all.
His previous occult revelations - via books written for Finbarr - have incurred the wrath of the occult community, primarily because of the belief that such powerful knowledge shouldn't be made public.  But at his age he now has nothing left to lose.  'This is my legacy.  Occult initiates will recognize that the mystery of the magic box is strong stuff, but that is no reason why it should not be made public.'  Finbarr will also - inevitably - be critizied.  But our motto is 'Let the reader decide.'  No attempt is made by us to sell this book to the innocent and unwary.  We carry enough titles for readers to choose without pushing one which is not for the unwary.
SO - PLEASE DON'T PURCHASE THIS BOOK IF YOU ARE IN DOUBT ABOUT USING THE POWERS IT DESCRIBES.
Basil LaCroix claims that the Egyptian Money Box can bring anything asked of it.  Sometimes it will work instantly; other times the results are slow - but just as definite.  he claims his own personal wealth has been accumulated through the box.
'I spend money faster than I can get it.  But I never lack for money.  I spend and spend, and yet there is always more money to hand.  When I've had too much I've simply invested it.'
PUT YOUR LOTTERY COUPONS IN THE MAGIC BOX.
PUT YOUR STOCKS & SHARES CERTIFICATES IN THE BOX.
PUT A PHOTO OF THE PERSON YOU DESIRE IN THE BOX.
'What most books don't tell you is how to find your own magic words of power.  Someone else's words of power will never be as potent as your own.'
'But these words will not work until mixed with the mystic signs and hieroglyphs of the ancient Egyptians.  Anybody can do it: but please don't try if you are of a nervous disposition.'
Can you handle sudden winnings? Can you handle the mysterious power over people you could possess? Are you ready to accept rapid improvement in your health, no matter how ill you are at present?
If the answer is 'Yes' then you shuld conside buying this book.  But remember, don't buy it if you are hesitant or nervous.
WHAT YOU CAN FIND IN THIS BOOK.  Here is a partial outline of it's contents: The power of the Logos - The poor girl who came into money - jerusalem, the cubic city - the man who received £5000 for nothing - How wealth and health are obtained by the ancient Egyptians - Who taught the Egyptians? - The Wretched teenager whose life was miraculously transformed simply by touching an ancient box - Ten minutes to make a little box - The pyramid destroys disease - The young man who got the stunning beautiful woman he desired, and more - Invocation of Nephtys - The man who committed a crime, yet surprisingly charges were dropped - Invocation of Hathor and Ptah - The man who wins time and again - How a debt ridden young woman found her word of power - How a crippled man's life changed - The rituals of Bast and Thoth - Dealing with psychic attack - Treating Osiris & Horus with respect - How to destry a malicious enemy - The man who repelled the power of a Satanist - The magic of ancient Egypt is the most powerful of all - A lazy way to get rich. 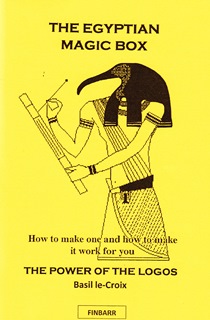