You can become rich without hard work.
Description

Actually the title of this book is a little misleading because when we studied its content we found that there were no less than 33 different and unusual "mind secrets" for making money.  This book is almost, in a sense, biographical, as it is the product of one mans unique discovery of what it takes to exchange poverty for wealth.  Always fascinated by "get rich" and "mind power" books, ex-assembly line worker Donald Peake could somehow never get their instructions to work for him.  he was almost resigned to a lifetime of just "making a living" when, one day, a flash of inspiration came to him that was to CHANGE HIS CIRCUMSTANCE COMPLETELY! Now, instead of struggling to make ends meet he lead a life of wealth and ease... and in lieu of reading books by others on how to get rich he now wrires them.  When we studied his book "The Money Secret", the subject of this advertisement, we recognised immediately that here was a formula, or group of formulas, that was very new and radical compared to anything we had seen before.  For instace this book is written from the perspective of an ex-working man as opposed to the usual outlook of a university trained academic.  That made it quickly practical and accessible to the ordinary working person who is not an academic.  Another unusual and intriguing feature was that Donald Peake had failed trying to become wealthy according to the precepts of the authors he had read.  We felt that a lot of people would be able to identify with this situation, making his approach both appealing and sympathetic.  But the aspect of his book which impressed us most forcibly was the unusualness of his ideas and solutions for poverty.  This gives the book a unique quality in the sense that not only are his ideas unusual, but can be considered PRACTICAL and WORKABLE also.  In fact we would unreservedly recommend this book to anyone whio is seeking a more, effective way of increasing his personal wealth at the present time.
If this "flash of inspiration" enabled Donald Peake to exchange mediocrity for wealth then what could it possibly achieve for you? Donald Peake's ideas are not a repeat of what is usually found in "get rich" books.  they never worked for him anyway.  What he proposes is different, and, as we said, "unique".  You will find his approach radical, thought provoking, and in our view, easy to apply for most readers.  he suggests, for example, that:
* You can make money from the unlikeliest things: What is considered "junk" or "waste" could be the source of great profit for you.
* You can become rich without hard work.  Amazingly "hard work", he insists, "can actually lower your chances of making big money".
* How being poor can actually give you a head start in your goal for better living standards.  This seems an extraordinary assertion, but once you read Peake's prognosis you will understand!
* How to "create your own luck". According to Peake a comprehension of a special psychological formula can increase the odds of success in almost any given situation.
* How one of the author's "money secrets" enabled him to make a 675% profit on one simple transaction.
* Why "thinking big" is better than "thinking positively".  Ironically, suggests Peake, "thinking positively" can be a handicap to becoming successful.  A strange notion, perhaps, but his explanation is a convincing one.
* A fabulous - yes fabulous- NEW "mind power" secret for acquiring the house or luxury of your dreasm, even if you are virtually penniless! We consider the whole book to be worth its small cost for this one revelation alone.  It is a secret which can be applied to any material objective you have in mind.
* Why "economic recession" cannot stop you from succeeding, when you know the methods to apply.  We certainly believe that universal application of Peake's advice can curve any economic malaise, be it individual or national. peake's instruction is more valid than the fruitless theories of a hundred professional economists!
* What to do if you do not at first succeed.  Always a realist, Peake recognises the possibility of failure even with the best psychological attitudes.  But you can find a way around failure: a "money secret" is provided which can, he says, outwit the obstacles.

This book is not intended to be an instruction manual on how to become a Rothschild or Rockefeller - claiming such would-be fanciful and perhaps fallacious - but it can help the average person convincingly improve his or her's present financial status.  The book itself cannot achieve this, this is for the reader's intelligent application of its ideas.  The book's emphasis is psychological rather than "economical" in its strict technical sense.  It is about attitudes, motives and ideas.  It is about succeeding where previously the only options were for failing.  The book is aimed at the ordianry man or woman. of reasonable intelligence and basic education, and is a practical guide to escaping the financial straight-jacket imposed by the limitations of the wage packet and monthly salary.  A better financial existence, we belive, is available to anyone ready to try Donald Peake's formulas.

Before closing this advertisement we would like to mention that this book's title is not quite so misleading as its actual multiciplicity of secrets first suggested.  There is in fact one secret, in addition to the 33 others, which the author claims is "worth a million", and constitutes the apex of the book's philosophy.  Like us, you will wonder why nobody else seemingly had ever thought of publishing this idea before, it being so simple and obvious.  Any student of practical psychology will immediately recognise it as something of which he or she had always been unconsciously aware, but somehow had never thought of giving expression.  "Psychologically orientated" it may be, but, says Peake, can be translated into very tangible pounds and dollars when applied "economically". 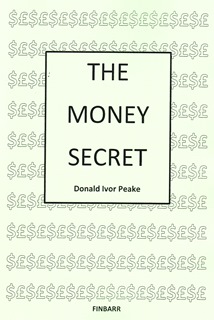