Miracle Secret of The Ancients

The ancients believed that a supernatural power informed all creation and was also directly involved in the lives of humankind itself. Therefore they continuously petitioned it for blessings and prosperity. The spiritual reality they believed in is still with us today. It never went away, its existence denied and vilified by modern organized religion.

The author Audra is a dedicated Pagan – a believer in this supernatural power – and is convinced that petitioning it is responsible for so much of her own personal good fortune.

For this book she has gathered some of the most effective Pagan Petitions which she says have worked for her over and over again.

For example, the Pluto Riches Prayer-Petition of the ancient Romans never fails her financial needs, she says.

For gambling wins she turns to the Roman Lord of Luck. He never fails her.

Likewise the ancient Egyptian Osiris is a wealth provider.

There is but one Power, the ancients believed, but it reveals itself in countless ways. These ‘ways’ are variously described as ‘goddesses’, ‘gods’, and as spiritual beings of every description.

Whatever their name or form they are there to help you, and help you they will.

YOU NEED WANT FOR NOTHING IF YOU PETITION THEIR HELP!

Petitioning is as easy as ABC and takes only a few moments. It is another form of prayer. There are no rituals or ceremonies to perform.

Anything of the heart can easily be controlled through petitioning. Eros, great god of love can usher in romance. Ask him for true love and Eros will go to it. Similarly the ancient Egyptian Isis. Prayer can bring the right person into your life.

The Hera Marriage Petition, once said and repeated regularly, will ensure peace and harmony in a marriage. It will defeat anyone trying to come between, for Hera is the protectress of conjugality.

Moderns use the words ‘charm’ and ‘charisma’ without any idea that they are evoking Charis, the originator and bestower of these highly desirable qualities. Petition her for you to receive these in abundance.

She can make you irresistible to any person, claims Audra.

For those pursuing sexual adventure, petitioning Ochun will prove invaluable.

Those who feel they need more self-confidence, and to be more assertive in general, need only to petition the goddess of fire Pele for help.

Freya, Goddess of Beauty and Youth is believed by the author to bestow these gifts on those who petition her. Audra swears to her beneficence.

For fertility the believer should turn to the moon goddess Luna whose concern this is. Sceptical moderns might scoff at the idea, but sophisticated Pagans took it very seriously.

If somebody is making your life miserable and everything seems bleak you may want to try the ancient Egyptian Set Enemy Destroying Petition; but it should only be used in just cause.

Petitioning the Pagan Power is easy, satisfying, and very rewarding. 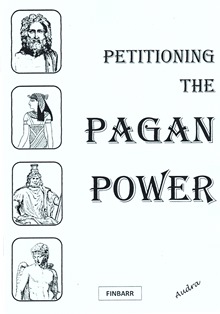