Can be spoken anywhere, any time, but only when needed!
Description

IT SAVES LIVES! IT PREVENTS INJURY! IT HEALS! IT HEALS RELATIONSHIPS! IT BRINGS MONEY! IT STOPS PAIN! STOPS FEVER!

Publisher James Finbarr writes -
For almost a quarter of a century I have had this secret in my file. It was an elderly Harold Jolet from Detroit who gave it to me, feeling it was safe in my hands. The problem was that he both wanted me to publish it – and he didn't!
It was given to him by a man in the 1930s. Some 20 years earlier this man had used it when he witnessed two cars colliding before his very eyes. Because of the Spoken Power, both drivers emerged unhurt, their vehicles miraculously unscathed!
Mr Jolet believed this power could help anyone who respected it. His worry was that because it was originally kept secret, in the wrong hands it could be misused.
Hence his concern and my dilemma.
The Spoken Power consists of an 11-word sentence, in English, which releases awesome energy.
It can be spoken anywhere, any time. But only when needed!
Mr Jolet has since passed on, so the moral responsibility for publishing the Spoken Power became solely mine.
He recalled the time when lightning struck his neighbour’s home, it catching fire. He spoke the 11-word formula and the fire stopped. Miraculously, there was no damage to the building!
Another time he ran to the scene of a car crash. The driver’s nose was gushing blood. Mr Jolet spoke the miracle sentence and the bleeding stopped immediately. The driver was dumbfounded! Worst of all – in another incident involving a car – Mr Jolet wound up upside down after careering across a highway. After speaking the Power his car immediately turned itself the right way up … and he emerged without a scratch!
Over time, he revealed the secret to others – those he felt he could trust – to give them divine protection.
This is not a ‘magickal formula’ in the usual sense: the Spoken Power releases the divine creative energy of the universe.
A woman who received the secret from Mr Jolet – but who wishes not to be named – used it for her failing marriage. Her husband was about to walk out when she spoke the Power.
He changed his mind right there and then. Another time, her daughter was struck down by a mysterious illness. After speaking the Power, she made an immediate recovery! This same woman used the Spoken Power at the race track. She won a bundle!
Why does it work? Who knows? Mr Jolet explained to me what allegedly happened at the Creation. A different picture of God emerged! This I explain in the booklet.
Mr Jolet did not want this to be treated lightly. The Spoken Power is not for amusement.
Precisely because it is so simple, some people may fail to respect it.
No previous experience – mystical or spiritual –is needed for the Spoken Power to work. All you need to know is in this booklet. DO NOT BE FOOLED BY ITS SIMPLICITY.
Can a miraculous divine power be immediately at hand when you most need it? Such a question many would ask. Now you can know; now you can ACTUALLY EXPERIENCE IT.
Only Finbarr would publish this. And even I have hesitated for almost a quarter of a century before doing so.
You do not have to belong to any secret society to possess true spiritual power – although this secret was originally known only to initiates. It is the spiritual gift of a lifetime.
In addition to the Spoken Power, there is a section in this booklet entitled ‘Banishing Relationship Problems’: how to end once and for all, difficulties you may have with others, be it a relative, lover, friend or colleague. 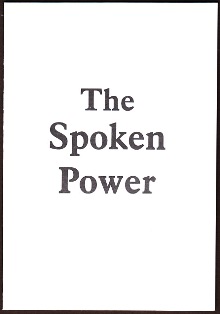